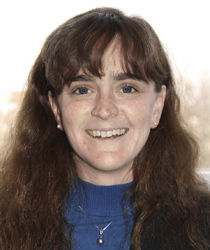 Christine Hartzell received her Ph.D. in Aerospace Engineering Sciences from the University of Colorado at Boulder in 2012. Her thesis topic was electrostatic dust motion near the surface of asteroids and the Moon. After completing her Ph.D., she was a Postdoctoral Fellow with the Keck Institute for Space Studies at the California Institute of Technology, where she studied granular media. She received her B.S. in Aerospace Engineering from the Georgia Institute of Technology in 2008. Her research focuses on dust motion on airless bodies for the purpose of understanding the evolution of these bodies and improving the design of spacecraft to explore them.

UMD Engineer Selected for Next Phase of Small Spacecraft Mission

Christine Hartzell is the mission scientist on one of three finalist missions selected by NASA for future small satellites.

She is one of 13 participating scientists selected by NASA for its first asteroid sample return mission.