Information about an asteroid’s internal structure provides critical clues about its origin and evolution. But since no internal probes have been conducted on these rock-like celestial objects, such information can only be obtained indirectly.

New research led by UMD aerospace engineering post-doc Yun Zhang, currently a researcher in associate professor Christine Hartzell’s Planetary Surfaces and Spacecraft Lab, could help scientists understand more clearly what asteroids are like on the inside—in particular, small to medium-sized asteroids that are known as “rubble piles” due to their loose, low-density composition.

Using the advanced computing capabilities available at UMD’s Deepthought2 cluster, Zhang has in effect reverse-engineered the asteroid Bennu, by running simulations based on numerical models and determining which one best matches Bennu’s observable features. Her findings were published on August 6 by Nature Communications, which featured it on its Editors' Highlights page. 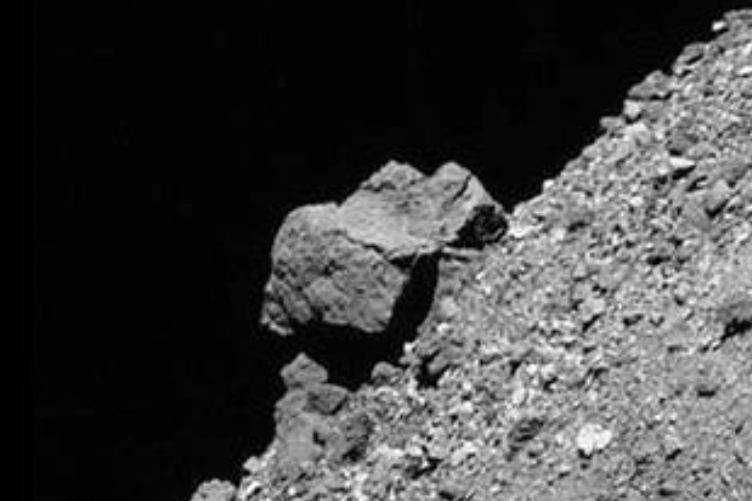 “Using the numerical models, we can explore different types of internal structure and how they evolved over time, and then we can make comparisons to the external geophysical features measured by the OSIRIS- REx mission,” Zhang said. OSIRIS-REx, launched by NASA in 2016, touched down on Bennu four years later, collecting a sample and conducting an extensive analysis of the asteroid’s surface.

Zhang’s findings suggest that Bennu came about as a result of a cataclysmic event—most likely a collision—that destroyed a previously existing, larger planetary body. The giveaway, Zhang said, is the diffuseness of its structure.

“Asteroids of Bennu’s size—namely, with a radius of about 200 meters—can be monolithic rocks rather than rubble piles,” she said. “Even in the case of some rubble-pile asteroids, the interior can be comparatively monolithic. Our findings show that Bennu definitively falls into the rubble-pile category–its interior is very loose in its composition. Essentially, it’s a hodgepodge of rocky chunks and fragments that have become held together by gravitational forces.”

“A change in cohesion of even a few Pascals can affect an asteroid’s structural evolution. This leads to very diverse evolutionary histories, and it explains why we can see so many different asteroid structures and shapes today.”

“The parent body, when it broke apart, produced thousands of fragments that eventually led to the formation not only of Bennu, but also many other rubble-pile objects, possibly including the nearby asteroid Ryugu,” she said.

Both Bennu and Ryugu have been explored by space missions: Ryugu by the Japanese space agency’s Hayabusa2 satellite, and Bennu by NASA’s OSIRIS-Rex. The latter observed several aspects of Bennu that would prove crucial to Zhang’s work. It confirmed, for instance, that Bennu does not have a moon. If it did, that fact would have necessitated a more cohesive interior.

Zhang’s models also factored in gravitational measurements obtained by the NASA spacecraft, as well as observations of surface slopes along with evidence of avalanches on Bennu's surface.

Her use of simulations in combination with OSIRIS-REx data makes her work pioneering, said Hartzell, the Planetary Surfaces and Spacecraft Lab director and a co-author of the Nature Communications paper. “Others have run similar simulations before, but this studyshe is the first to comprehensively compare the modeling outcomes to the detailed geophysical data from an actual spacecraft mission to a specific asteroid.”

The new research yields an additional take-home: even minor variations in an asteroid’s internal composition can have far-reaching effects.

“In running the models, I found the range of outcomes to be quite striking,” Zhang said. “A change in cohesion of even a few Pascals can affect an asteroid’s structural evolution.”

“This leads to very diverse evolutionary histories, and it explains why we can see so many different asteroid structures and shapes today.”