Who Was A. James Clark?

A. James Clark’s life and career are the embodiment of the American Dream. Clark spent his life building an empire in the construction industry, the road to success paved by his hard work and steadfast commitment to honesty, integrity, and good citizenship. In 1994, the University of Maryland’s School of Engineering became known as the A. James Clark School of Engineering.

The Story of A. James Clark

Born on December 2, 1927, in Richmond, Virginia, his father, Woodruff Clark, worked in insurance sales and for a construction company, and his mother, Sallye (Wray) Clark, was a homemaker. At the age of six, Clark and his parents relocated to the Washington, D.C., region, where he eventually built an empire in the construction industry. Summers were spent in Virginia, where he earned 10 cents an hour working on his grandmother’s farm. He attended Bethesda-Chevy Chase High School and graduated from the Devitt Preparatory School in Washington, D.C. When it came time for college, the Clark family could not afford to send their son out of state for school. As a young man of modest means, Clark hitchhiked his way from his home in Bethesda, Maryland, to College Park each day to pursue a degree in civil engineering at the University of Maryland (UMD). His education was made possible by a state scholarship, and his only educational expenses were books.

Shortly after graduating in 1950, Clark was hired as a field engineer for a job at the University of Maryland by the George Hyman Construction Company, a small, local contracting business with roots in the Washington, D.C., building arena since 1906.

Over the course of the next 60 years, his leadership and vision transformed it into one of the largest construction companies in the nation.

Clark climbed the company ladder from field engineer to general manager in the early 1960s to president and chief executive officer by 1969. Along the way, Clark’s ingenuity and competitive spirit helped set the company apart from other construction companies in the region. Under his leadership, the George Hyman Construction Company became the first builder to use tower cranes, which effectively reduced build time and labor costs and put Hyman Construction at the cutting-edge of construction technology.

In 1977, Clark founded Omni Construction, a subsidiary of Hyman. The two companies merged in 1996 to become Clark Construction.

Early in his career and well into his 80s, Clark spent as much time in the field as possible, visiting jobsites, climbing ladders, and learning about the latest innovations in the construction field.

Headquartered in Bethesda, Maryland, the company Clark grew now boasts a portfolio of some 2,000 projects from coast to coast. In Washington, D.C., alone, Clark Construction has built 28 Metro stations, the World Bank headquarters, the Verizon Center, FedEx Field, Nationals Park, the National Museum of the American Indian, and the United States Institute of Peace, to name a few.

“If there was a major project to be built in the area, Jim really wanted it,” said Clark Enterprises President and Chief Operating Officer Larry Nussdorf. “You would often hear him say, ‘This is our home; we should build it.’”

At Clark’s alma mater, the company has constructed 26 buildings. From the iconic McKeldin Library and Memorial Chapel to the Byrd Stadium and Eppley Recreation Center, those who set foot on the University of Maryland’s campus are likely to spend time in at least one building constructed by the alumnus’ company.

"Jim Clark did much more than build buildings. He built a company with a team who shared Jim’s passion for honesty, integrity, and being good citizens,” Nussdorf told the crowd of over a thousand gathered at Washington National Cathedral for Clark’s memorial service. “He left an indelible mark on the communities where he did business and the thousands of people who benefitted from his vision and generosity.

At the heart of Clark’s character was a commitment to building opportunity for others, whether employees of the company or citizens of the communities in which he erected buildings.

“He was always trying to help people be more successful and become better at what they do,” said University System of Maryland Chancellor and former UMD President William E. “Brit” Kirwan. “His willingness to mentor and advise countless others has made an enormous difference in the many lives he touched.”

He believed strongly in education, and often quoted Benjamin Rome, George Hyman’s nephew and successor and Clark’s mentor and friend: “Young people are our future. If we don’t invest in their education, what kind of future will we have?”

In the spirit of this commitment, Clark gave generously to his alma mater.

At the time, William Destler was dean of the engineering school, and one of his first assignments was getting to know Jim.

“When I met with him following the announcement [of his pledge], I thanked him for the confidence he had shown in the faculty, students, and staff by making what was at the time one of the largest gifts ever to the university,” said Destler, who now serves as president of the Rochester Institute of Technology. “His reply was simple: ‘Bill, this is not a gift, it’s an investment, and I don’t make bad investments.’”

Ten years ago, Clark pulled Nariman Farvardin aside after a University of Maryland Foundation Board of Trustees meeting. It was time to make another investment.

“He held my hand, looked me in the eyes, and told me he has decided to make a $30 million contribution to establish the largest scholarship fund in the university,” said Farvardin, who served as dean of the Clark School, provost, and acting president of the university and is currently president of Stevens Institute of Technology. “The entire conversation lasted no more than two minutes, but his generosity will impact generations of young men and women.

Indeed in 2005, Clark established a new $30 million A. James Clark Scholarship Endowment to provide financial support for Clark School undergraduate engineering students based on merit, need, and diversity. His gift strengthened the university’s ability to attract the most talented students nationally and helped address the nation's shortage of highly trained engineers.

“Jim gave his time to get to know each and every one of his Clark scholarship students,” said Clark School Dean and Farvardin Professor Darryll Pines. “He was very proud of these students and he let them know that he expected them to be great leaders of our nation.”

Inspired by his strong interest in biosciences, Clark made a gift in 2012 to support the design and construction of A. James Clark Hall, which will be the 27th structure built by Clark Construction on the UMD campus. Scheduled to open in 2017, A. James Clark Hall will serve as a hub for human health innovation in the state of Maryland, the federal region, and beyond. 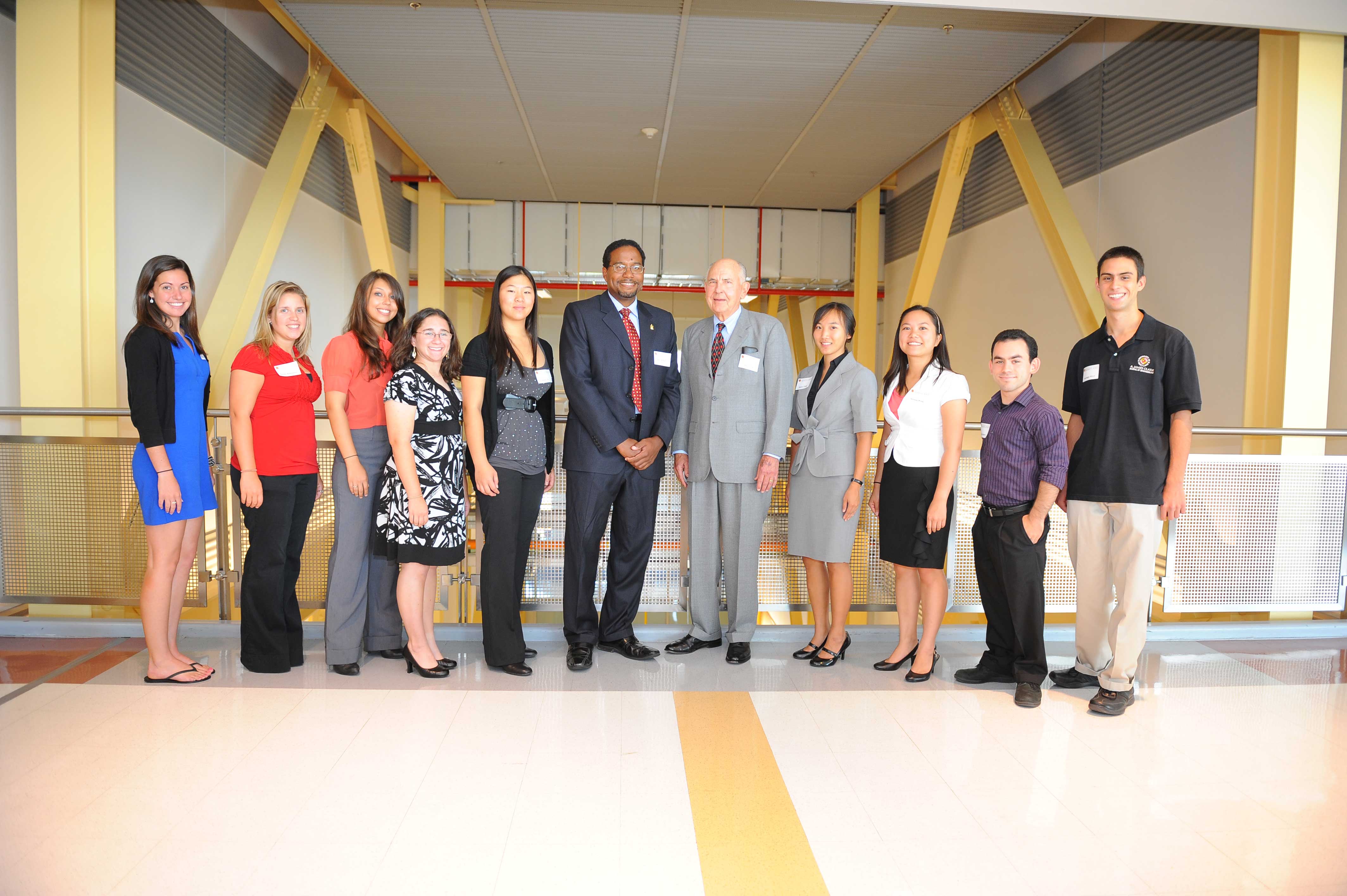 Clark served as chairman of Clark Enterprises until his death on March 20, 2015, at the age of 87. Following the news of his passing, the headlines of major news publications memorialized him as “King of Concrete” and “Legendary Builder." To those who knew him, though, Clark was private, humble, and had no pretenses.

“On one hand, he was so human, caring, and unpretentious in his beliefs, while on the other hand, he was a giant of a builder who was driven by grand ideas, confidence, and achievements,” said National Academy of Engineering President C.D. Mote, who got to know Clark during his presidency at UMD. “He was the engineer’s engineer.”

Today, the company he joined fresh out of college as a field engineer prides itself as being a local builder with national reach, and Clark Construction’s 4,200 employees across the nation carry on Clark’s vision and values in their daily work.

The UMD map looks quite different today than it did when A. James Clark was a student in the 1940s. Thousands of students wake up each day in dorms built by Clark, and their intellectual growth is cultivated in academic halls that were constructed by the company. The UMD community comes together to worship at the Memorial Chapel and to cheer on the Terps at Maryland Stadium.

Above all, Clark’s greatest legacy at UMD is the foundation for success he laid for thousands of students who dream of becoming engineers.

“The generations of Maryland students whose successful careers were made possible by his generosity will forever stand as testament to a legendary engineer, a visionary leader, and a faithful Terp,” said UMD President Wallace D. Loh.

"I believe that if you make your money in a community, you have an obligation to give back to it." - A. James Clark