The Northeast Branch of the Anacostia River runs through the heart of Edmonston, Md. In somewhat of a give-and-take relationship, runoff from Edmonston's streets and parking lots carries many pollutants into the river; when it rains, the Anacostia "gives back" in the way of flash floods caused by overwhelming amounts of stormwater coming from upstream communities.

Recently, 24 students from the University of Maryland partnered with local agencies to develop a natural system that could alleviate the flooding problems and decrease the amounts of pollutants flowing into the Anacostia River Watershed by building a bioretention system at Tanglewood Park.

A bioretention system treats stormwater runoff by collecting it in shallow depressions and filtering it through plants and soil before it ultimately reaches a larger body of water. This particular system was designed to naturally filter and treat runoff water from the park's community center, parking lot and surrounding roadways.

Almost 100 feet of pipe connects the bioretention site to a nearby stream that feeds the Anacostia -- providing a drainage system for the large amount of water collected from the nearby hard surfaces, helping to alleviate the flooding issue.

"For us, the significance of the student's project is that it models environmental responsibility for other areas," said Edmonston Mayor Adam Ortiz. "If every development, farm, town and city followed their example, we would nearly eliminate flooding and in time we would save the Chesapeake Bay."

The students are with the UM A. James Clark School of Engineering's chapter of Engineers Without Borders (EWB), an organization that usually sends engineering students abroad to design and build infrastructure projects in developing countries (over the past five years the Clark Schools' EWB chapter has sent students to construct simple infrastructure projects in Thailand, Brazil, Peru, Ethiopia, and Burkina Faso). That program is now so popular that there are too many students to send them all abroad. So, two dozen or so UM students, led by undergraduates Kristen Markham (civil and environmental engineering) and Ethan Schaler (mechanical engineering), recently turned their attention to the flooding problem much closer to home instead.

Because the project is within the borders of the United States, it is not an official Engineers Without Borders project.

"This is a service project in which UM students have used classroom knowledge to be good citizens in their own backyard," said Kevin Calabro, Keystone instructor of aerospace engineering at the Clark School, who served as a faculty advisor for the project. "The project utilizes green engineering solutions to improve the environment, an emphasis of the university."

"By doing the project within the United States, we were still able to provide the same mutual benefits for both the students and the community as that of an international EWB project,' said Markham. "The students attained valuable experience working in a team with professionals, faculty and governmental agencies and using their engineering skills to solve a real world problem. The town of Edmonston, like those communities EWB works with abroad, benefited from the final project completion."

The project, which was identified by environmental planner, Carol Kennedy Hearle in the university’s Facilities Planning Department, spanned five months, and was completed at the beginning of June. The Prince George's County government provided in-kind support. The Chesapeake Bay Trust and the UM Student Government Association provided financial assistance to the project as well. Environmental Quality Resources, LLC provided the heavy gear, training and equipment operators required to complete the construction phase of the project.

"This project was another manifestation of the linkage Clark School students see between engineering and social commitment. And they are willing to demonstrate that by applying not only their engineering education, but also their own sweat to improve a community’s wellbeing and the environment," said Deborah Goodings, the EWB chapter's main faculty advisor. "The goodwill cooperation of many partners – university; government; and private – transformed the project from an engineering learning experience to a shared lesson in good citizenship." 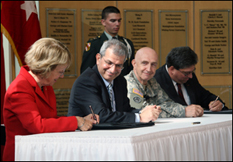