The University of Maryland’s A. James Clark School of Engineering is proud to celebrate its 125th anniversary in 2019 and an enduring tradition of research, learning, and innovation. The College of Engineering joined what was then known as the Maryland Agricultural College in 1894. As we prepare to celebrate 125 years of daring vision and lasting impact, we’re uncovering the rich history of the Clark School.

Take a look at what we’ve discovered so far!

Who was O.H. Saunders? 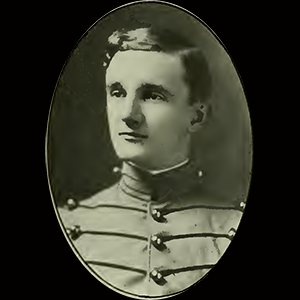 Honors student, salutatorian, track and field star, military commander. These are only a few of the roles Oswald Hurt (O.H.) Saunders played during his time with the College of Engineering. He went on to serve a distinguished career in the U.S. Army, working his way up through the ranks to serve as a commanding officer. Saunders also remained active in University of Maryland affairs, serving as the President of the Engineering Alumni Chapter and organizing class reunions.

What is this artifact?

Saunders used this field notebook in the spring of 1909, during his junior year at the Maryland Agricultural College. As a civil engineer, Saunders conducted much of his lab work outdoors, mapping and surveying. He recorded observations and field work in this journal, now preserved by University Archives. This artifact helps us understand the people, places, and things that were an integral part to the College of Engineering in its early days at the University of Maryland.

What type of fieldwork was Saunders conducting? 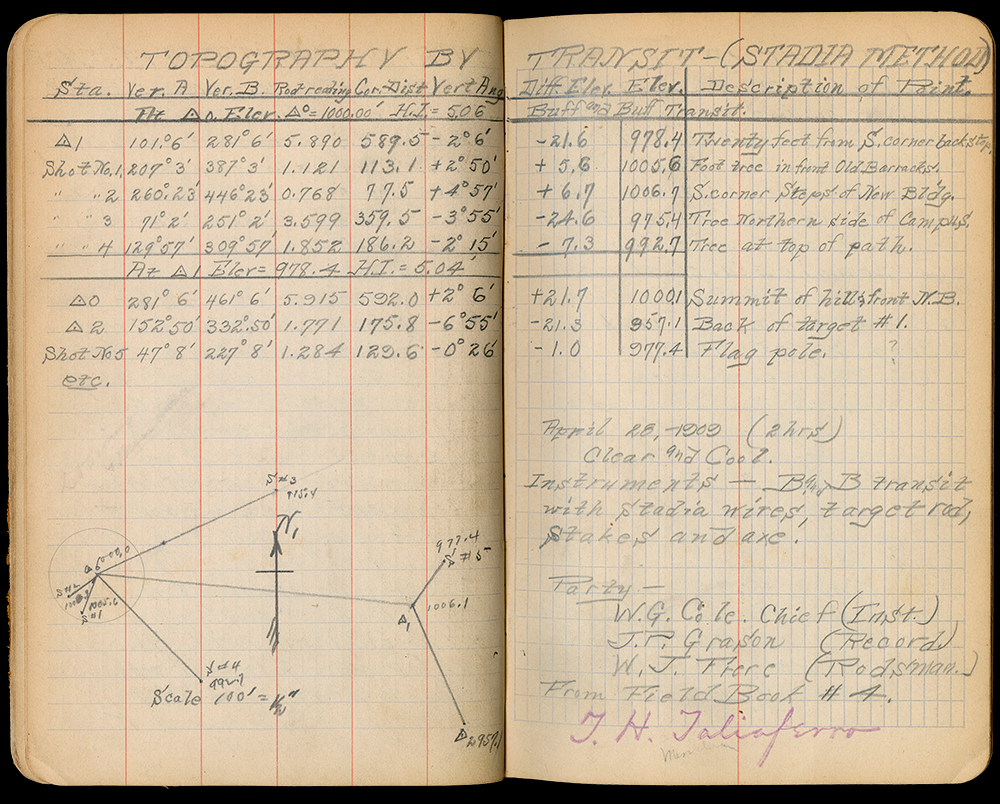 In this experiment, entitled "Topography by Transit-Stadia Method," Saunders and his lab partners were creating a topographic map. He used a method called transit-stadia where distance, elevation, and location measurements are taken in the field and then plotted on paper later. This page show measurements and rough sketches made in the field, which were likely made into a finished topographic map not included in this field notebook.

Who were Saunders’s lab partners?

As the instrument man, W.G. Cole was responsible for supervising the surveying party. In addition to his leadership in the field, Cole was known around campus for his skills on the lacrosse field, a sport still in its infancy at the University of Maryland in 1910. Cole went on to continue his engineering education at the Massachusetts Institute of Technology, eventually working as a safety engineer for the Metropolitan Life Insurance Company.

J.P. Grason, the recorder, was in charge of taking notes and making sketches as the instrument man called out readings. Grason served as class president for three years and was also the drum major in the cadet band. He went on to work as a Baltimore County Highway Engineer in his hometown of Towson, Maryland.

W.J. Frere is named as the rodsman in Saunders’s notebook. In the stadia method for topographic mapping the rodsman held a rod on the point being observed in order for the instrument man to take readings. Frere served as class vice president for three years. He went on to have a varied career in civil engineering, working as a foreman at the Bartlett Howard Building Company, a civil engineer for the railroad, a highway engineer, and as an engineer for the Soil Conservation Service.

What kind of equipment did Saunders use?

Saunders’s notebook lists four instruments used to conduct this particular field experiment: a Buff & Buff transit, a target rod, stakes, and an axe. A transit is a precise optical instrument mounted on a tripod and used to measure angles between fixed points. Buff & Buff transits were manufactured by the Buff & Buff Manufacturing Company beginning in 1871. The target rod would have been marked with stadia lines for distance measurement.