The Fischell Department of Bioengineering (BIOE) and the A. James Clark School of Engineering extend their congratulations to Christopher Jewell, who was elevated to the rank of Associate Professor, effective July 1, 2017.

“I’m extremely lucky to have been in the rich educational and research environment the campus has created for faculty, and for the incredible group of graduates students, postdoctoral scientists, undergraduates, and research staff who have joined the lab and who carry out all of the research underpinning our efforts,” Jewell said.

Since Jewell joined BIOE in August 2012, he and his research team have worked to develop biomaterials that generate immune responses with specific, tunable characteristics – an idea known as “immunomodulation.” The group’s research has two complementary components: basic investigations to understand the interactions between synthetic materials and specific immune cells and tissues; and design of biomaterials-based vaccines that tune or modulate immune responses to combat cancer and autoimmune disorders. Across these areas, Jewell has led more than $5.5 million in funding. Earlier this year, he and his team received extensive recognition for their latest efforts to develop next-generation therapies for multiple sclerosis and other autoimmune diseases and were featured in a live press conference organized by the American Chemical Society to highlight Jewell Lab research at the organization’s national meeting in San Francisco.

A Damon Runyon-Rachleff Innovator and National Science Foundation (NSF) CAREER Award Recipient, Jewell has published 60 papers and patents, including studies in Cell Reports, ACS Nano, Proceedings of the National Academy of Sciences, and Nature. Since last year, the Jewell Lab has led 23 papers, five of which were featured on covers.  Jewell is also an Associate Scientific Advisor for Science Translational Medicine and has guest-edited several special journal issues in the biomaterials and immune engineering areas.

Among his many awards for both research and education, Jewell was named a 2016 Cellular and Molecular Bioengineering Young Innovator and a Young Investigator of the Melanoma Research Alliance and the Alliance for Cancer Gene Therapy. Earlier, he appeared in USA Today as a “New Face of Engineering,” and in 2014 was selected as the state of Maryland’s Outstanding Young Engineer by the Maryland Academy of Science, the state’s highest honor awarded to an engineer under age 36.

Along with his BIOE appointment, Jewell serves as an assistant professor of Microbiology and Immunology with the University of Maryland School of Medicine, a full member of the Greenebaum Comprehensive Cancer Center, and as the campus's first faculty member appointed as a scientist with the U.S. Department of Veterans Affairs. The latter is supported by a $1.1 million award led by Jewell to develop new technologies for combating multiple sclerosis that could improve treatment options for veterans. 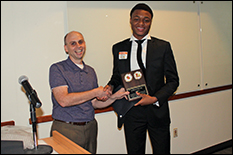 In addition to his myriad contributions to the field, Jewell personifies what it means to pay it forward by providing mentorship to aspiring engineers and scientists in his lab and the community. This year, the campus recognized Jewell with the Graduate Faculty Mentor of the Year Award. Outside his lab, Jewell created the Program to Enhance Participation in Research (PEPR) in cooperation with Wheaton High School of Silver Spring, Md., in 2013. Through this initiative, Jewell and graduate mentors in the Clark School team up with high school students to delve into bioengineering topics and share an inside look at what it means to pursue a career in science and engineering. Each year, the program culminates in a Poster Symposium and Reception; this year, the symposium highlighted the work of nearly 30 high school students. Thus far, Jewell has championed these and other outreach efforts to work with more than 500 area high school students and raise over $10,000 for pediatric cancer charities.

“Dr. Jewell has been a wonderful teacher, mentor, and colleague in our bioengineering department,” said John Fisher, Fischell Family Distinguished Professor and BIOE Chair. “He is truly an invaluable member of our community, and we look forward to working with him for many years to come.”

Moving forward, Jewell hopes that his research team will be able to transform some of the technologies they have created into therapeutic options for patients. The group also hopes to move into areas that generate basic knowledge and can thereby accelerate the pace of vaccine and immunotherapy design.