The project, funded by a grant from the National Science Foundation, builds on Yu's previous work with fluorine magnetic resonance imaging (19F MRI), a specialized form of MRI used to visualize drugs, cells, genes, or implants administered to a patient for therapeutic reasons. In an earlier study, Yu and his colleagues developed a new imaging agent for use in 19F MRI that provides clearer images with less background noise, and passes quickly and safely out of the body, thereby addressing two problems currently hindering the use of 19F MRI in clinical settings.

Those results are now being applied to the development of multichromic 19F MRI, in which multiple therapeutics can be tracked simultaneously by assigning each its own imaging agent that causes it to emit a different radiofrequency signal than the others. Each signal is assigned a particular color in the resulting images (a process called pseudo-coloring), generated by a device called a fluorometer.

Yu and his colleagues are designing particles called fluorinated paramagnetic complexes (FPCs) that will create the customized signals. The FPCs consist of three parts: the fluorine (19F), which is responsible for emitting a signal when excited by a magnetic pulse; metal ions, which modulate the 19F signals to the desired frequencies; and chelators, organic molecules used to safely contain the metal ions, which are toxic.

Generating signals that can be interpreted as different colors is only half of the problem. Because of the inherent difficulty in receiving a clear, lasting signal from only one agent, working with a "full palette" multiplies the challenge.

The key to the new multicolored images, Yu explains, lies in the two novel ways he and his team are using the metal ions: They are assigning each class of FPC a different type of metal ion, which modulates the radiofrequency signal generated by the 19F nucleus in a distinct way (traditional MRI techniques use only one kind of ion, gadolinium); and they are arranging each FPC's chelator-wrapped ions in a way that also turns them into a magnetic shield, protecting the fluorine from outside influences—including other FPCs—that could change its signal.

"In multichromic MRI, the critical thing is to maintain the stability of the resonance frequency of each imaging agent," Yu explains. "In other words, the 'color' of each imaging agent should not change over time. We envision that symmetrically arranged metal ion-chelates can form a magnetic shield around the 19F signal emitter, which should prevent fluctuations in the local magnetic environment from interfering with its resonance frequency."

Yu's proposal, "Engineering Fluorinated Paramagnetic Complexes for Multichromic 19F MRI," is funded by a three year, $542,000 grant from the National Science Foundation's Biophotonics, Advanced Imaging, & Sensing for Human Health Program. The study will be conducted in collaboration with Professor Eun-Kee Jeong of the Department of Radiology, University of Utah. 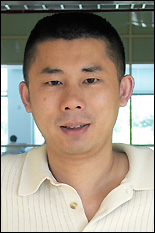