Dyes that create a better picture of the progression or retreat of disease and report on how well therapeutics are being delivered may soon be available to doctors and technicians thanks to a new biomedical imaging project underway at the Clark School.

The National Institute of Biomedical Imaging and Bioengineering (NIBIB), part of the National Institutes of Health (NIH), has awarded a four year, $1.8 million Research Project Grant (R01) to Associate Professor Bruce Yu (joint, Fischell Department of Bioengineering and School of Pharmacy) and Professor Zygmunt Karol Gryczynski (Department of Molecular Biology and Immunology, University of North Texas) for their proposal, "Novel Fluorophores for Molecular and Cellular Imaging." Gryczynski and Yu are the principal investigators on the joint project.

When doctors want to observe the status of living tissue inside the body, they may use fluorescence imaging, a technique in which the patient is injected with a special dye that can emit fluorescent light when excited by a laser called an excitation beam. The dye, which penetrates the tissue and can be tailored to attach to specific types of cells, drugs, or proteins, "lights up," capturing a brief period of activity which may reveal processes that indicate health or disease, or the successful delivery of drugs to a targeted location. When molecules labeled by the dye fluoresce, they become visible to a device called a fluorometer, which produces images that reflect the distribution of the dye and by extension the molecules' presence, number, and what they are doing.

"Two fundamental problems in biomedical imaging, from single molecule studies to whole body imaging, are background noise that makes the image harder to interpret, and the lack of very bright dyes that fluoresce long enough to get a good image," Yu explains.

Gryczynski and Yu will be developing a new group of dyes made with small organic compounds called triangulenium that fluoresce when exposed to red and near-infrared light, the wavelength of choice for deep tissue penetration. The dyes have enhanced spectral properties, including high photostability, increased sensitivity, and extra-long fluorescence lifetimes.

Long, however, is relative. "At present we lack dyes that fluoresce in the red spectral range for longer than ten nanoseconds," says Yu. "This isn't long enough to accurately image large membrane and cellular proteins that may take tens or hundreds of nanoseconds to go through important changes or complete activities we need to see.

"The dye molecules we're working on now," he continues, "are interesting because they fluoresce for 20 nanoseconds, which makes it possible to collect background-free fluorescence images of these large molecules."

Gryczynski and Yu's research groups will collaborate with that of Associate Professor Bo Laursen (Department of Chemistry, University of Copenhagen), the inventor of the triangulinium dyes. Laursen's group will manufacture the dye, Yu's group will attach it to a rigid peptide scaffold to create a brighter macromolecule with a higher signal intensity, and Gryczynski's group will conduct fluorescent spectroscopy studies.

The R01 grant program, the NIH's oldest and one of its most prestigious, funds investigator-initiated, health-oriented research that supports the Institutes' mission.

Yu and Gryczynski, who have collaborated since 2003, previously received a R01 grant from NIBIB for an ongoing study on the engineering of peptide-based biomaterials, a project that earned Yu a Presidential Early Career Award for Scientists and Engineers in 2005. 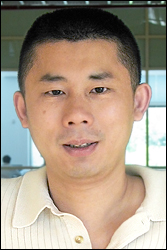