When metropolitan area drivers hear the word, “traffic,” most often another word comes to mind: congestion.

According to a study issued earlier this month by the U.S. Department of Transportation, congestion will no longer be a headache confined to areas surrounding the country’s largest cities. In fact, “Beyond Traffic 2045: Trends and Choices” states that, “short of land use plans that expressly curtail it, sprawl is likely to remain a dominant development pattern and, if we do not act, congestion will be much more widespread.”

While this trend could spell more headaches for everyday commuters, congestion also poses a major economic problem, according to Mark Franz, Assistant Director of Outreach and Technology Transfer for the National Transportation Center at the University of Maryland (NTC@Maryland).

“What people might not realize as they’re sitting in traffic is the number of commercial vehicles also impacted by congestion and jams,” he said. “When you’re thinking in terms of a passenger vehicle versus a commercial freight vehicle, the cost for the freight vehicle sitting in traffic is significantly higher. To start, the person driving that vehicle is working on the clock. Second, the material he or she is transporting is being delayed, which means final delivery could be impacted. As such, there’s a cost associated not only with the person in the vehicle, but also the goods that are being transported by that vehicle.”

Additionally, while the advent of online shopping has changed the way many consumers purchase their goods – reducing the need for consumers to drive to and from local stores – it does, in turn, increase demand for the transport of goods by freight vehicles.

“When you think about what is contributing most to wear and tear on the roads, freight vehicles typically prove more costly than personal vehicles in that respect,” Franz said.

That is why NTC@Maryland is conducting research in freight fluidity in an effort to better understand ways commercial vehicles can efficiently transport goods through the capital region.

“Not only is it important to know where congestion occurs and when, but also, how predictable congestion is,” said Dr. Lei Zhang, Director of NTC@Maryland and Associate Professor for UMD’s Department of Civil and Environmental Engineering. “We understand, for instance that, if you’re driving on the inner loop coming from northern Virginia through I-270 during peak hours, you’re likely to hit congestion – so, you can plan around that. But, if we want to drive that same route during an off-peak period and an accident or other incident causes it to become congested, there’s an added cost to that. Both passenger vehicles and freight vehicles are unable to predict or plan for such events.”

As for minimizing the costs of congestion during peak hours, there are a number of strategies both travelers and businesses can adopt, Franz said.

“One option is to implement active traffic management systems, which use real-time data to adjust or change some of the demand patterns and traffic flow patterns on certain roads,” he said.

Some examples of active traffic management systems in the metropolitan region include freeway ramp metering, whereby red and green lights are used to control travelers as they enter a freeway; and hard  shoulder running, whereby signs above a shoulder indicate when passengers can use the shoulder as a normal lane during peak travel hours.

“Other ways to minimize congestion come from the demand management strategies,” Franz said. “Flexible start and end times allow workers to avoid peak periods of congestion. Similarly, if more organizations allow their people to telework, we would likely see fewer cars on the roads during peak periods.”

Despite the fact that these strategies offer promise for increased congestion, yet another factor is leading to more cars on the road each day, Franz said.

“The number of people who commute to work alone is actually on the rise,” he said, referencing “Beyond Traffic.”

This is the trend despite the fact that High Occupancy Vehicle (HOV) lanes and High Occupancy Toll (HOT) lanes are designed largely to encourage carpooling. Additionally, HOT lanes require solo drivers unwilling to forfeit use of the extra lane to pay a fee to drive in the HOT lane without transporting additional passengers. Although this money often goes toward construction and maintenance of roadways or other transportation projects, the cost of building roads continues to rise at a rate too quick to offset.

“One of the other challenges to the funding issue is the fact that modern cars are more fuel-efficient than older cars,” Franz said, noting that that the major funding mechanism for highways is federal and state fuel tax. “From an environmental perspective, fuel-efficient cars are obviously a great thing. But, if people are not buying as much gas nowadays, they might not be contributing their share of the cost toward the system they’re using. If more and more drivers are going home and plugging in their cars overnight, those drivers are essentially using roads without contributing direct funding for those roads.”

And, as recent questions about road maintenance and bridge safety permeate today’s transportation discussions, NTC@Maryland stands uniquely positioned to shed light on how congestion mitigation impacts infrastructure, the economy, and the livelihood of millions.

“Given that Washington, D.C. ranks as one of the top congested regions in all of the United States – and the fact that this is the nation’s capital region – this area could serve as the test-bed for new technologies or ideas on fighting congestion and improving efficiency of freight movement,” Zhang said. “In turn, congestion mitigation can pave the way for improved traveler safety and greater economic development in the region."

About the National Transportation Center at Maryland 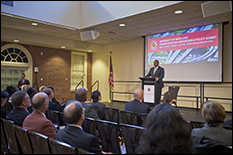 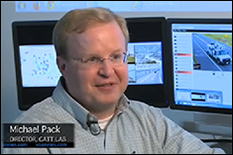