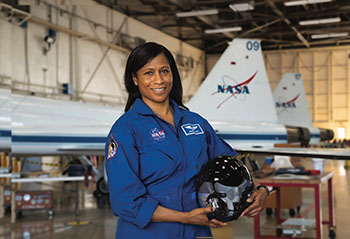 Epps will join NASA astronauts Sunita Williams and Josh Cassada for a six-month expedition to the International Space Station (ISS), with the launch planned for 2021. In doing so, Epps will make history as the first Black woman astronaut on an ISS crew.

A native of Syracuse, New York, Epps earned her bachelor’s degree in physics in 1992 from LeMoyne College and then went on to complete a master’s degree in science (1994) and a doctorate in aerospace engineering (2000) at UMD’s A. James Clark School of Engineering.

She is the first UMD Ph.D. graduate in aerospace engineering to become a NASA astronaut, and the second from the Clark School, after electrical engineering alumna Judith Resnick.

"There is no recipe to becoming an astronaut,” Epps told students during a campus visit. “If they examine the backgrounds of those selected in my class, our backgrounds range from military, engineering, biology and medical."

Prior to becoming a NASA astronaut, Epps worked at the Ford Motor Company’s Scientific Research Laboratory, co-authoring several patents. She then joined the Central Intelligence Agency (CIA), where she spent seven years as a CIA technical intelligence officer before her selection by NASA as a member of the 2009 astronaut class.

She has returned to the UMD campus as a guest speaker on multiple occasions. In 2012, Epps was inducted into the aerospace engineering department’s Academy of Distinguished Alumni, which recognizes alumni who have made notable contributions to the field of aerospace engineering and/or achieved other significant accomplishments. The following year, she delivered the Clark School’s Winter Commencement address.

"There is no recipe to becoming an astronaut,” Epps told students during a campus visit. “If they examine the backgrounds of those selected in my class, our backgrounds range from military, engineering, biology and medical. They must make their careers and lives the best possible so that the only job that can take them away is a career to become an astronaut."

While on board the ISS, Epps will be responsible for supporting both research activities during the mission and onboard maintenance for the nearly twenty-year-old station. In addition, crew members serve as experiments themselves, with data regularly collected on them to provide insights into the effects of space on the human body.

For nearly 20 years, the ISS has served as a critical testbed for NASA to understand and overcome the challenges of long-duration spaceflight. As commercial companies focus on providing human transportation services to and from low-Earth orbit, NASA will concentrate its focus on building spacecraft and rockets for deep-space missions.

To the Stars: UMD Alumna to Be First African-American Crew...