A biotech innovator who now administers one of the largest combined academic research portfolios in the nation and a pioneer in the field of artificial intelligence have been named the University of Maryland’s representatives in the National Academy of Inventors’ Class of 2020 Fellows, joining the ranks of some of the nation’s most prestigious and creative academic inventors.

Locascio, a biomedical researcher who has published more than 100 scientific papers and holds 12 patents, oversees the research and innovation enterprise at the College Park and Baltimore campuses, which garner a combined $1.1 billion in external research funding each year. She leads the development of large interdisciplinary research programs, technology commercialization, innovation and economic development efforts, and strategic partnerships with industry, federal, academic, and nonprofit collaborators. Locascio is a professor in UMCP’s Fischell Department of Bioengineering and a professor (secondary) in the Department of Pharmacology at the University of Maryland School of Medicine.

Locascio worked for decades at the National Institute of Standards and Technology (NIST), rising from a research biomedical engineer to her most recent post as acting principal deputy director and associate director responsible for leading the internal scientific research and laboratory programs across two campuses in Gaithersburg, Md. and Boulder, Colo.

"I am honored and grateful to be recognized by the National Academy of Inventors for the work that I have accomplished in my 30-plus years as a biomedical researcher and inventor," Locascio said. "Being named a fellow of NAI aligns with my continued work here at the university to advance research innovations that make a positive societal impact for individuals in our state and across our country."

Chellappa was a longtime professor and chair in the Department of Electrical and Computer Engineering whose work has been central to such fields as computer vision and machine learning. His research includes projects involving signal and image processing, pattern recognition, multi-dimension stochastic processes, statistical interference, image analysis, robust and secure biometrics, and artificial intelligence in computer vision. He holds four patents.

“I was inspired to choose engineering as my career soon after I listened to the 1969 landing of Apollo 11 on my home radio in India. I am honored, 50 years later, to be recognized as a fellow of the National Academy of Inventors,” Chellappa said.

He left the University of Maryland in July after 28 years and is now at Johns Hopkins University as a Bloomberg Distinguished Professor. He maintains close ties to UMD through his appointments in the Department of Electrical and Computer Engineering and UMIACS.

Chellappa said he was also pleased that NAI elected UMD alum and colleague S. Kevin Zhou (Ph.D. ’04) as a fellow. Now a professor at the Chinese Academy of Sciences, Zhou did pioneering work on unconstrained face recognition in Chellappa’s laboratory as a doctoral student.

Locascio and Chellappa join six other Maryland faculty as NAI fellows: Ray Liu and Min Wu, professors in the Department of Electrical and Computer Engineering (2019); C.D. (Dan) Mote, Jr., president emeritus of the National Academy of Engineering and a Regents Professor and former president of the University of Maryland (2017); Distinguished University Professor Rita Colwell (2016); and Distinguished University Professors John S. Baras and Benjamin A. Shneiderman (2015). 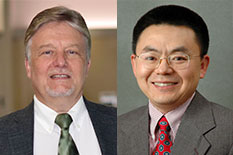