Over 75 alumni, faculty, family, students and staff, including former ADA inductees Mr. George Orton and Dr. Norris Krone, Jr., and A. James Clark School of Engineering Dean Darryll Pines, attended the event to celebrate the inductees and their achievements. 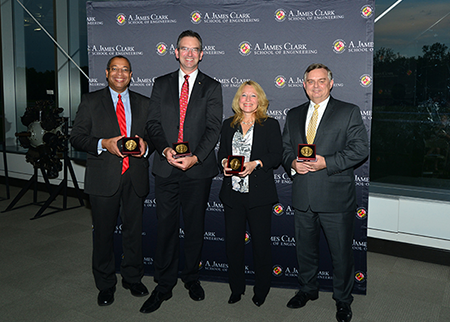 Mr. Chris Van Buiten (B.S. '89) is the Vice President of Technology and Innovation at Sikorsky Aircraft, where he runs the Sikorsky Innovations group responsible for maturing next-generation technologies including X2 technology™, active rotor, and autonomy, as well as defining next-generation products. He joined Sikorsky in 1989 where he has been engaged in the conceptual and preliminary design of Sikorsky products such as the S-92® commercial transport, the CH-53K heavy lift helicopter, and the UH-60M BLACK HAWK helicopter.

Dr. David Van Wie (B.S. ‘80, M.S. ‘82, Ph.D. ‘86) became the Mission Area Executive for the Precision Strike Mission Area of the Johns Hopkins University Applied Physics Laboratory on June 27, 2014. Dr. Van Wie is responsible for strategic planning, execution, and performance of approximately $100M in annual funding in programs addressing integrated strike, air dominance and electronic attack. He is an active member of the U.S. science and technology community, and has published more than 140 papers in the fields of high-temperature fluid dynamics, plasma aerodynamics and hypersonic airbreathing propulsion systems. He holds a research faculty position in the Department of Mechanical Engineering at Johns Hopkins University, and is currently serving on the Aeronautics and Space Engineering Board of the National Academies National Research Council. Dr. Van Wie is a fellow of the American Institute of Aeronautics and Astronautics.

Dr. James Wang (M.S. '87, Ph.D. '92) is the Senior Vice President responsible for the global marketing strategy of all AgustaWestland helicopter products and services. Prior to position, he was the vice president of research and development, responsible for creating innovations and collaborative research, and developing a coherent technology strategy. Dr. Wang was at Sikorsky Aircraft for eighteen years where he was known as one of the most energetic and prolific technical experts in the areas of aeromechanics, ground test, flight test, and preliminary design. His technical contributions to the rotorcraft community included improving the state-of-the-art in comprehensive rotorcraft codes, validating vibratory loads reduction methodologies, devising aeroelastic instability alleviation, and leading many wind tunnel and full scale rotor tests. He has led R&D on Variable Diameter Tiltrotor (VDTR), Comanche, UH-60 Black Hawk, S-92, and US Presidential VH-3 helicopter programs. His technical contributions were critical to the success of these landmark helicopters.

Dr. Yvette S. Weber (‘90, ‘94) serves as the Deputy Director, Armament Directorate, Eglin Air Force Base Florida. The 1,500+ person directorate executes a portfolio valued at more than $52B. The directorate develops, fields, and sustains our combat forces’ highest priority precision weapons. She is responsible for every aspect of directorate operations – personnel, budget, execution, performance and supportability. Weber entered civil service in 1992 prior to completing her Ph.D. in Engineering from the University of Maryland. She has held various assignments in the Air Force Research Laboratory, Headquarters for Air Force Materiel Command, and at the Air Force Life Cycle Management Center.

The Academy of Distinguished Alumni was established in 1999 to honor University of Maryland alumni who have made significant contributions to the field of Aerospace Engineering. In the fall of 1999, the Department of Aerospace Engineering inducted its first four members, as well as aviation pioneer and lifelong UMD supporter, Glenn L. Martin. Recipients receive the Glenn L. Martin Medal as part of their induction.

More photos from the event can be viewed on Facebook.