For more than 500 years, the drawings and imaginations of Italian Renaissance mastermind Leonardo da Vinci have inspired generations of scientists, inventors and creative thinkers.

In a new spin on a classic da Vinci design, students from the University of Maryland’s Department of Aerospace Engineering have taken one of the master’s ideas, the “Aerial Screw,” and developed a working prototype.

“When we first tackled this challenge as part of the Vertical Flight Society’s original call for proposals, we recognized that there was a serious possibility that it just wasn’t even possible to fly with an air screw,” said Semenov (M.S. ‘20), who contributed to the preliminary experimentation to measure lift and rotor structure modeling. “The whole point of the competition was to evaluate whether this old, ancient concept could even work at all.

The team’s winning design did in fact look functional—on paper and in computer simulations—but could it actually fly in reality?

“We saw some really interesting behaviors in the lift mechanisms of the air screw in our computational fluid dynamics simulations and models where we found this interesting edge vortex that would form,” explained Semenov. “But with such a novel design, we couldn’t be 100% sure that the phenomenon was true, so creating a working model would help us validate if that was in fact happening.”

Encouraged by Chopra, master’s student Austin Prete spent the next year and a half taking Elico from a theoretical working model on paper to a functional prototype.

Prete was responsible for not only the prototype development and flight testing, but he was building, repairing and fabricating all of the aerial screws for the working model.

“That first successful flight was an incredible moment,” said Prete. “It took three months, just trying to get it to fly correctly. I had to just step back and take a moment.”

While the research and findings are far too preliminary to extract potential applications at this point, making a working model based on their designs has been a success in and of itself.

“Just the way the air screw worked was surprising,” added Sutherland, Ph.D. candidate and team captain of the 2020 design team. “It’s possible that the aerial screw might be less noisy, or create less downwash than a regular rotor with the same amount of thrust, but there is still a lot to learn and study before we know where it could be applied.”

Prete adds that another interesting finding of the design was that the screws can create the same amount of lift but with less rotations compared to a traditional rotor, which may contribute to the reduced downwash—a not insignificant issue when flying traditional rotorcrafts.

Looking ahead, Prete and his Elico team members—who are all soon to be graduating—hope work continues on the aerial screw.

“I’d like to see work continue to improve the performance and climbing capabilities as well as the vehicle’s ability to hover,” said Prete.

The technology is so new, the team also agrees that characterizing the rotors is important so future work can be done evaluating the aerial screw against existing rotor styles so they might start understanding in what flight regimes the screw design might perform best.

“For example, can you make an adjustable rotor screw?” said Prete. “You can make adjustments to a traditional rotor inflight, so what adjustments could you make to an aerial screw mid-flight to change its performance?”

According to Chopra, UMD intends to continue pursuing a more detailed study on this topic. “We are exploring the possibility of sponsored work with some funding agency,” he said. “The objective is to advance the aeromechanics design tools focused on the da Vinci Aerial Screw for a vertical lift system.” 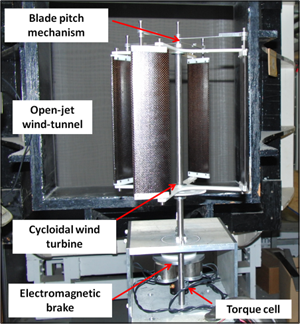 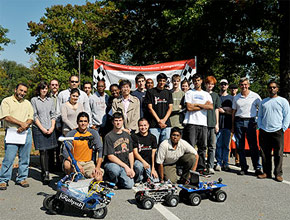