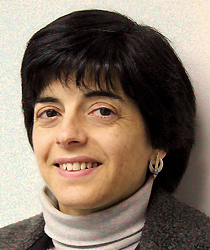 Dr. Salamanca-Riba’s research involves the use of the transmission electron microscopes and the atomic force microscope at the Advanced Imaging and Microscopy  (AIM) Laboratory.  The project on covetics involves the understanding of the role of nanocarbon on the structure and properties of metals. The incorporation of C enhances several properties of the host metal, such as, the thermal and electrical conductivity, the oxidation and corrosion resistance and the yield strength. Covetics can be deposited as thin films and used as contacts in photovoltaics and other electronic applications. This work is in collaboration with Argonne National Laboratory and DGC Industries.

In collaboration with the Army Research Laboratory, Auburn University and Rutgers University, Dr. Salamanca-Riba’s project on 4H SiC MOSFETs consists of the investigation and analysis of electron energy loss spectra (EELS) across the interface between the 4H SiC substrate and the SiO2 oxide layer for samples with different oxidation process and post oxidation treatments.  Analysis of the EELS spectrum imaging maps is carried out using principal component analysis.

Her project on DNA attached to GaAs aims at understanding the anchoring mechanism between thiolated DNA and GaAs that gives rise to arrays of single stranded DNA molecules oriented normal to the surface of GaAs. These structures could be used for the fabrication of biosensors and radiation sensors.

Dr. Salamanca-Riba’s has an additional project focusing on the growth and characterization of semiconductor nanowire arrays of ZnO for the fabrication of light emitting devices. The nanowires are combined with liquid crystals for applications as hybrid photovoltaics in which the liquid crystal is the whole conductor and the ZnO the electron conductor. These solar cells are expected to have higher efficiencies than all organic solar cells and be less expensive to produce than all inorganic solar cells.

ENMA 680: Experimental Methods in Materials Science
This course covers the basic principles of electron microscopy theory, electron diffraction, and imaging theory. The electron beam sample interaction that gives rise to different signals is related to the structural and compositional information that is obtained from a sample using a TEM. The most common TEM techniques for structural characterization of a sample, namely, electron diffraction, bright/dark field imaging, and high resolution lattice imaging are discussed. Compositional information obtained from x-ray fluorescence and electron energy loss as well as the resolution of these techniques is also covered. A description of techniques used to study magnetic materials is also presented.

ENMA 683: Special Problems in Materials Science, Structural Determination Laboratory
This course covers the operation of an electron microscope. TEM techniques that are used to characterize the structure, defects, and composition of a sample are presented and used to study a variety of materials. These techniques are: electron diffraction patterns, bright/dark field imaging, high resolution lattice imaging and analytical microscopy techniques, such as, energy dispersive X-ray spectroscopy and electron energy loss spectroscopy. This course also covers different sample preparation techniques for TEM. The goal of the course is that the students become independent users of the TEM. The main objective in this class is to become an independent user of the TEM. This is achieved by learning:

Join us for an energetic discussion!

A Space Elevator: How Microscopic Materials Give Way to Big Ideas