New research in the University of Maryland Department of Mechanical Engineering sheds new light on some of the mechanical properties behind aortic dissection. Aortic dissection is a serious, often fatal, condition in which the inner layer of the aorta, the large blood vessel branching off the heart, tears, leading to internal bleeding and possible rupture.

Due to the complex layers of tissue that make up the aorta's arterial walls, the exact mechanisms of how arterial dissection occur are not well understood, and there are no current predictive models to know when dissection might occur.

Associate Research Professor Henry Haslach and mechanical engineering graduate student Lauren Leahy, along with a team of undergraduate researchers, spent the past few years applying mechanical principles to investigate the effects of pressure on aortic tissue. Using bovine aortas, the team ran a series of tests that subjected the tissues to pressure and shearing stresses.

What the team discovered that was most surprising was that the aortic tissue did not dissect, or crack, in a continuous path. Instead, after the initial small crack was made (as a model for what happens in vivo)—from the interior outward, through several layers of tissue—it began tearing around the circumference of the aorta, or circumferentially. 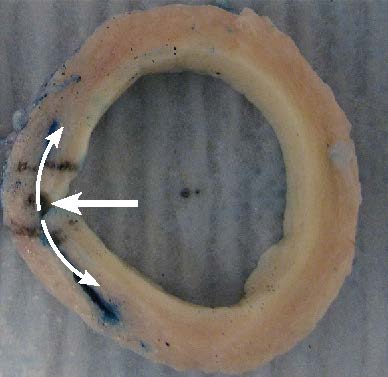 This circumferential crack direction during shear (shown at left, blue dye was put into the cracks to make them visible), when the tissue is under pressure, may indicate that the different types of layers making up the aortic wall might each play a different role in aortic dissection. In addition, current mathematical models of the artery do not take in account circumferential shearing.

Haslach, Leahy and their team's work demonstrates the application of mechanical engineering principles to soft tissue research and provides experimental data that could support a new fracture theory for soft tissue applications.

Their research, "Crack Propagation and Its Shear Mechanisms in the Bovine Descending Aorta," was published in the Biomedical Engineering Society's Journal of Cardiovascular Engineering and Technology