Have you ever thought about what it takes to control the appliances, electronics, and vehicles you use every day? Almost all devices we use rely on feedback loops, a type of self-adjusting control system designed to respond appropriately to what it senses or to information it receives.

But what if you need to regulate cell traffic inside a diagnostic device? Or keep a drug particle on course so it reaches the exact location of a disease inside a patient's body? Or even manipulate a single atom during the construction of a nanoscale device?

When things get small, things get difficult. As researchers strive to miniaturize everything from electronics to medicine to airborne surveillance, the ability to design effective feedback loops at tiny scales has a substantial impact on success.

"People don't really know yet how to implement feedback in miniaturized systems," says Shapiro. "The people who are developing micro- and nanoscale systems are experts in nanofabrication, chemistry, and optics, but they're not usually experts in feedback control—that's an entirely different discipline."

Shapiro's research group is one of the very few pioneering an emerging field known as "control of the small." Those who have succeeded in it so far, he says, have had to become fluent in at least two areas: control theory and the field in which control is needed, such as microfluidics or nanofabrication. At the moment, it's an exclusive club.

"The overlap between people who work in micro- or nano- and control systems is tiny," he says. "The last time I went to a magnetic drug targeting conference, there were about 300 doctors, chemists, nanofabricators, and magnetics specialists there, but I was the only 'controls guy' in the room."

Shapiro and his colleague, Jason Gorman (Intelligent Systems Division, National Institute of Standards and Technology) hope to change that. They have co-edited, contributed to, and recently published the first book dedicated to the topic, Feedback Control of MEMS to Atoms.

The book is designed to introduce scientists who specialize in the design of micro- and nanoscale devices to control theory, and vice versa. Each chapter presents research conducted at an increasingly smaller scale, starting with microelectromechanical (MEMS) devices and ending with the manipulation of individual atoms in quantum systems.

Included in the book is Shapiro's own chapter, in which he describes his group's design of microfluidic systems that move cells from place to place on a lab-on-a-chip device by using electrical fields to generate fluid flows inside of it. A camera, working in tandem with specialized software on a computer, sees a cell and notes its location. The system uses this data to adjust the fluid flow though the chip to guide the cell to the requested destination, a process Shapiro describes as pushing the cell down a little customized river. The camera continuously tracks the cell's progress, enabling ongoing guidance and course correction. This setup, he says, uses off-the-shelf components, is more accurate, costs far less, and can be applied to more situations than the tool usually used to capture and move cells, a laser tweezer.

In the book's conclusion, Shapiro and Gorman highlight the issues common to each of its ten independent examples.

"These were very different projects, including control of atoms, fabrication processes, particle design and thin films," says Shapiro. "But we discovered that all of us had to become proficient in two disciplines, and we all had to go from start to finish, from the initial mathematical models and fundamental physics, all the way through analysis, control design, and experimentation. There were no cutting corners."

Shapiro hopes the book will inspire more researchers to take control of the small. "For the first time," he says, "we explain how to get the same benefits of feedback control at the micro- and nanoscale as we can in electronics, airplanes and cars."

Find Feedback Control of MEMS to Atoms on Amazon »

Shapiro on Nanotech Team for Assembly of Colloidal Crystals 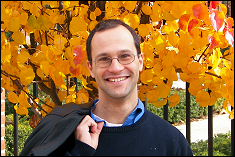