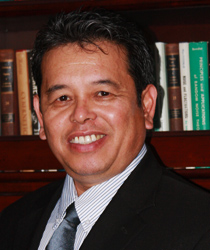 Dr. R.D. (Mel) Gomez is a Professor and Associate Chair for Undergraduate Education of the Department of Electrical and Computer Engineering at the University of Maryland, College Park. He obtained his Ph.D. in Condensed Matter Physics from the Univ. of Maryland, M.S. degree from Wayne State University in Experimental Atomic Physics and B.S. degree from the University of the Philippines. He co-authored more than 100 scientific publications, including several book chapters and three US patents in the general area of nanotechnology.

Apart from research, he teaches undergraduate and graduate courses in quantum theory, electromagnetic theory, magnetism, electronic circuits and engineering design. As Associate Chair, he has implemented significant changes in the EE and CpE programs to modernize the curricula to better prepare students for jobs in the industry and graduate careers. He is a proponent of ‘hands-on’ education, and has spearheaded the development of several training laboratories in the department. He is also leading an effort to develop EE programs in Southern Maryland and at the Universities at Shady Grove.

Dr. Gomez has been active in the international community in various roles such as the General Chair of the IEEE Intermag Conference in 2005, the Chair of the Technical Committee of the Magnetics Society in 2004-2007 and an Editorial Board Member of the IEEE Transactions in Magnetics in 2000-2004, president and board member Philippine American Academy of Scientists and Engineers. He has served as consultants to several agencies including the National Institute of Standards and Technology, Walter Reed Army Medical Center and Royal Institute of Technology in Sweden. He is also actively engaged in programs that benefit the Philippines, and has founded a program known as VISSER (Versatile Instrumentation System for Science Education and Research) to promote sophisticated yet cost effective instruments for K-12 students.

Prof. Gomez's research interests lie in the broad areas of magnetism, nanotechnology and biochemical detection with emphasis on the phenomena and processes at the atomic and molecular length scales. He directs a modest group of postdoctoral associates and students who seek to understand and exploit novel quantum effects that manifest themselves at reduced dimensions and size, with applications in magnetism and spin-polarized transport at the molecular length scales, and biomolecular sensing.  He is currently working on ways to more efficiently detect the genetic signatures of cells and pathogens, and his team’s most recent patent in 2011 is a method to detect genes using carbon nanotube transistor arrays.

The ESIOT Program is a two-year program intended for transfer students in Maryland.

For the past three years, Professor Gomez has challenged students to push the laws of physics and the limits of technology in his electric bicycle capstone course.

Clark School engineers compete in 125-Mile EBikes! Design Competition to test the limits of electric bicycles and to celebrate 125 years of engineering at Maryland.

The Clark School gives this award to a junior faculty member for excellence in teaching.

The award is given annually to scientists who have excelled in their contributions to science, particularly in areas beneficial to Philippine science.

This award is bestowed annually to faculty members who have provided remarkable contributions to the field of teaching.

Speaker To Graduates: Energy is an Opportunity for all Engineers