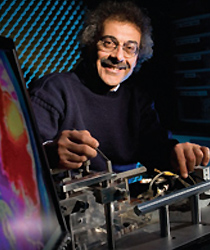 Dr. Shamma has been a member of the University of Maryland faculty since 1984, when he started as an Assistant Professor in the Electrical Engineering Department. He has been associated with the Institute for Systems Research since its inception in 1985, and received a joint appointment in 1990. He is a fellow of the Acoustical Society of America and the Institute of Electrical and Electronics Engineers.

Dr. Shamma's research deals with issues in computational neuroscience, euromorphic engineering, and the development of microsensor systems for experimental research and neural prostheses. Primary focus has been on studying the computational principles underlying the processing and recognition of complex sounds (speech and music) in the auditory system, and the relationship between auditory and visual processing. Signal processing algorithms inspired by data from neurophysiological and psychoacoustical experiments are being developed and applied in a variety of systems such as speech and voice recognition and diagnostics in industrial manufacturing. Other research interests included (at various times) the development of photolithographic microelectrode arrays for recording and stimulation of neural signals, a VLSI implementations of auditory processing algorithms, and development of robotic systems for the detection and tracking of multiple sound sources.

Representation of the acoustic signal at various levels in mammalian auditory systems. Ranges from theoretical models of auditory processing in early and central auditory stages, to neurophysiological investigations of the auditory cortex, to psychoacoustical experiments of human perception of acoustic spectral profiles

Distinct regions in the brain use their own neural pathways and networks to process either spoken math or language.

The resulting "network of networks" will further the scientific grand challenge of developing neuromorphic artificial intelligence.

Study reveals how the brain nimbly and rapidly change responses to incoming sensory stimuli depending upon the cognitive context of the moment.

The National Deafness and Other Communication Disorders Advisory Council advises the Secretary of HHS and the directors of NIH and its NIDCD.

Project will investigate a radically novel view of 'active' hearing.

Progress could aid in development of devices for those who, through illness or injury, have lost the ability to speak.

Study could lead to more effective approaches to behavioral training.

Allocation of a chair is a major event of international scientific life.

This is the second article by the group to appear in the journal in 2010.

A team of researchers from the Clark School and two other UMD colleges were awarded a four-year grant under Collaborative Research in Computational Neuroscience program.