There is a need and demand for fast, low-power, low-cost, portable, selective and sensitive robust gas sensors for non-invasive medical screening and diagnostics, environmental sensing, and explosives detection.

Solid-state sensors, where the material’s electrical resistance changes proportionally to the detected molecules, are often used in gas and chemical sensing due to their low cost, robust nature, and ease of operation. However, complex gas compositions, like those found in human breath or the environment, make conventional selective gas detection challenging, with current solid-state sensors suffering from poor selectivity in these environments.

Two-dimensional materials, with their atoms exposed to the environment, allow for more interactions with gas molecules and demonstrate higher sensitivity, faster response and use less power than their 3D counterparts.

For example, graphene—a single, 2D layer of carbon atoms—can detect molecules in concentrations less than 1 part per billion, however it also suffers from poor selectivity.

Daniels and members of his Dimensional Materials Laboratory recently demonstrated the exceptional sensing capabilities of quasi-freestanding, bilayer epitaxial graphene. They were able to selectively detect SARS-CoV-2—the virus responsible for COVID-19—in as little as 60 copies/mL of the virus found in aerosol breath samples in less than a second, by immobilizing SARS-CoV-2 antibodies on the surface of the material.

“Low-cost, non-invasive health and environmental monitoring is the goal. The concentration of gases present in exhaled breath is proportional to those found in the bloodstream. So small increases in concentrations of acetone or ammonia in exhaled breath, for instance, can indicate underlying health problems like diabetes or kidney failure.”

“While there are specific biomarkers, like antibodies, we can use to target a particular pathogen, selective gas sensing in a background of thousands of different compounds, like those on the breath, is challenging,” Daniels said. “The goal is to filter out the molecules we aren’t interested in by size and detect molecules of interest while maintaining the sensitivity and detection speed of the sensor-enabled by graphene.”

Daniels and his team are also investigating the gas sieving capabilities of the large gap found between layers of two-dimensional transition metal oxides grown on graphene. The distance between these layers allows gas molecules of similar, and smaller, sizes to be trapped in the transition metal oxide and then electrically detected by the underlying graphene. In addition, the distance between layers can be fine-tuned by loading positively charged ions—like lithium and sodium—within the gap, enabling tunable gas selectivity.

“Low-cost, non-invasive health and environmental monitoring is the goal,” said Daniels, highlighting uses that extend beyond COVID-19. “The concentration of gases present in exhaled breath is proportional to those found in the bloodstream. So small increases in concentrations of acetone or ammonia in exhaled breath, for instance, can indicate underlying health problems like diabetes or kidney failure.”

In addition, this project’s educational and outreach goals are to engage underrepresented minorities in STEM programs through course-based undergraduate research experiences, internships, and mentorships with local high schools.

“I am here today because of the truly amazing people who helped guide and mentor me,” adds Daniels. “To provide mentorship and support to future scientists and engineers through research is more than just paying it forward; it is my obligation. My own path towards obtaining a doctorate and entering the professoriate was guided by individuals in my position.”

NSF CAREER Awards provide support in recognition of early career professionals with promising research who have the potential to serve as academic role models and lead within their respective fields. These awards are among the most prestigious in the nation for up-and-coming faculty. 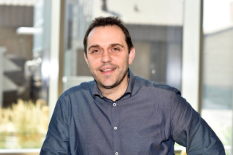 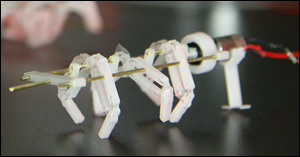