His career is punctuated by collisions of collaboration—and the spaces that breathed life into his bold new ideas. Meet Emilio Fernandez—and the visionary new facility he helped bring to Maryland’s College Park campus.

Emilio Fernandez (‘69) is no stranger to less-than-perfect working conditions.

While both still students at the University of Maryland, he and his friend and new business partner Angel Bezos (’69) were awarded a government contract for instrumentation cables, but they didn’t have a dedicated place to fabricate them—so they created the space they needed, after hours, in the conveniently long hallways of the engineering school’s Glenn L. Martin Hall. 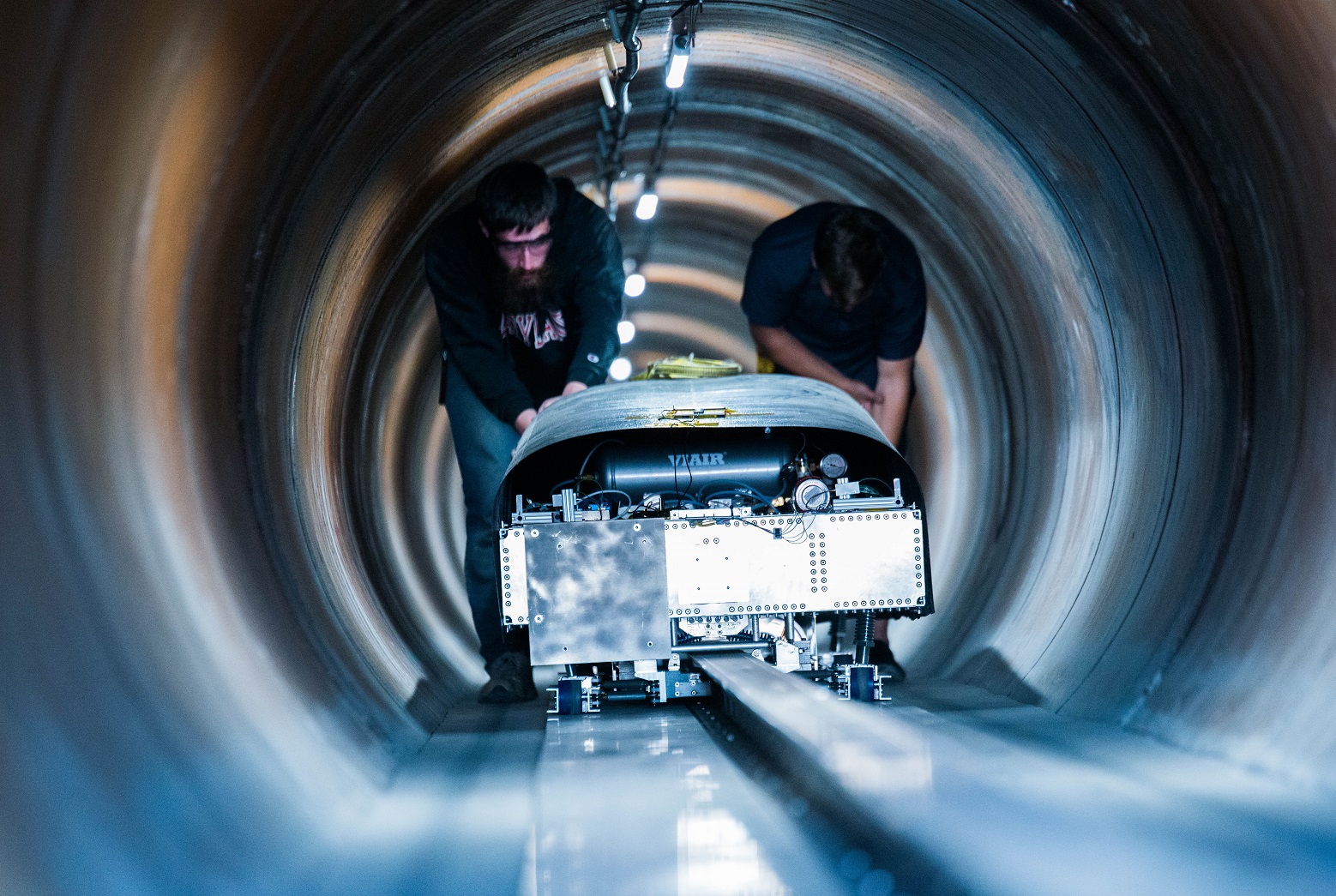 More than 50 years later, Fernandez holds dozens of patents, including many co-invented with Bezos for work that has literally transformed railroad operations; another, which defined e-reading devices such as the Kindle, became the most-cited U.S. patent ever issued. But a recent experience reminded Fernandez of certain challenges he faced as an undergraduate. Ever the engineer, it was a problem that Fernandez knew he could help solve.

While visiting a student team preparing for the Hyperloop Pod Competition sponsored by SpaceX, Fernandez was simultaneously impressed by the students’ work and troubled over their working environs. Their organization was impeccable, with a place for everything and everything in its place, but the students were building their prototype in the outmoded garage of an abandoned car dealership.

“I was concerned about the overall quality of what they had to deal with—but they were so driven, and they did so well,” Fernandez says. Recalling the hours that he and Bezos spent as students hacking together inventions in their respective basements, he said to himself, “It would be nice if they had a better facility.”

The E.A. Fernandez IDEA (Innovate, Design and Engineer for America) Factory opens this spring. The building is intended to foster an attribute that Fernandez credits as driving his own success: the joys and surprises of collaboration, in pursuit of making things better.

Others involved in the IDEA Factory’s creation see it as full of parallels with Fernandez’s own life and experiences. One in particular stands out: his near-constant habit of recognizing a sliver of possibility, then wedging it wide open into a doorway of opportunity.

When UMD President Darryll J. Pines was dean of Maryland Engineering (2009–2020), he and Fernandez hatched the concept of the IDEA Factory together. “Emilio’s approach to creativity and problem solving is inclusive: individuals from different geographies and backgrounds, together in one space, participating in the process,” says Pines. “And that’s reflected in the vision for the IDEA Factory: a space for all of campus to bring their ideas to the next level.”

“My hope is that it’s an open forum where people can feel safe to try different and new things,” says Bezos, who is the naming donor of the IDEA Factory’s Rapid Prototyping Lab. “People say, ‘think outside the box,’ but Emilio and I didn’t know there was a box to begin with. That’s what I hope the IDEA Factory will foster: an environment in which people feel free to think unthinkable scientific thoughts.”

Origins of a tinkerer

Scene: An 11-year-old boy bends over the glowing orange tubes of a radio on the kitchen table of his home in Havana, Cuba. He’s the kind of kid who dismantles things in order to understand how they work. Today, however, he builds. Young Emilio clutches a precious birthday present: a miniscule transistor gifted to him by an uncle in the United States. Shocked more than once, he learns to respect electricity. Affixing the radio to a circuit he’d designed himself, he eagerly powers it on—and promptly burns it out. Heartbroken, he swears he will forever take more care with electronics.

Scene: As revolution erupts into social unrest, a 16-year-old Fernandez is sent by his parents from Cuba to the United States. Over the years he saves money and helps his parents join him. His father, a lawyer, is offered an opportunity at the Organization of American States in Washington, D.C. Maryland becomes home. 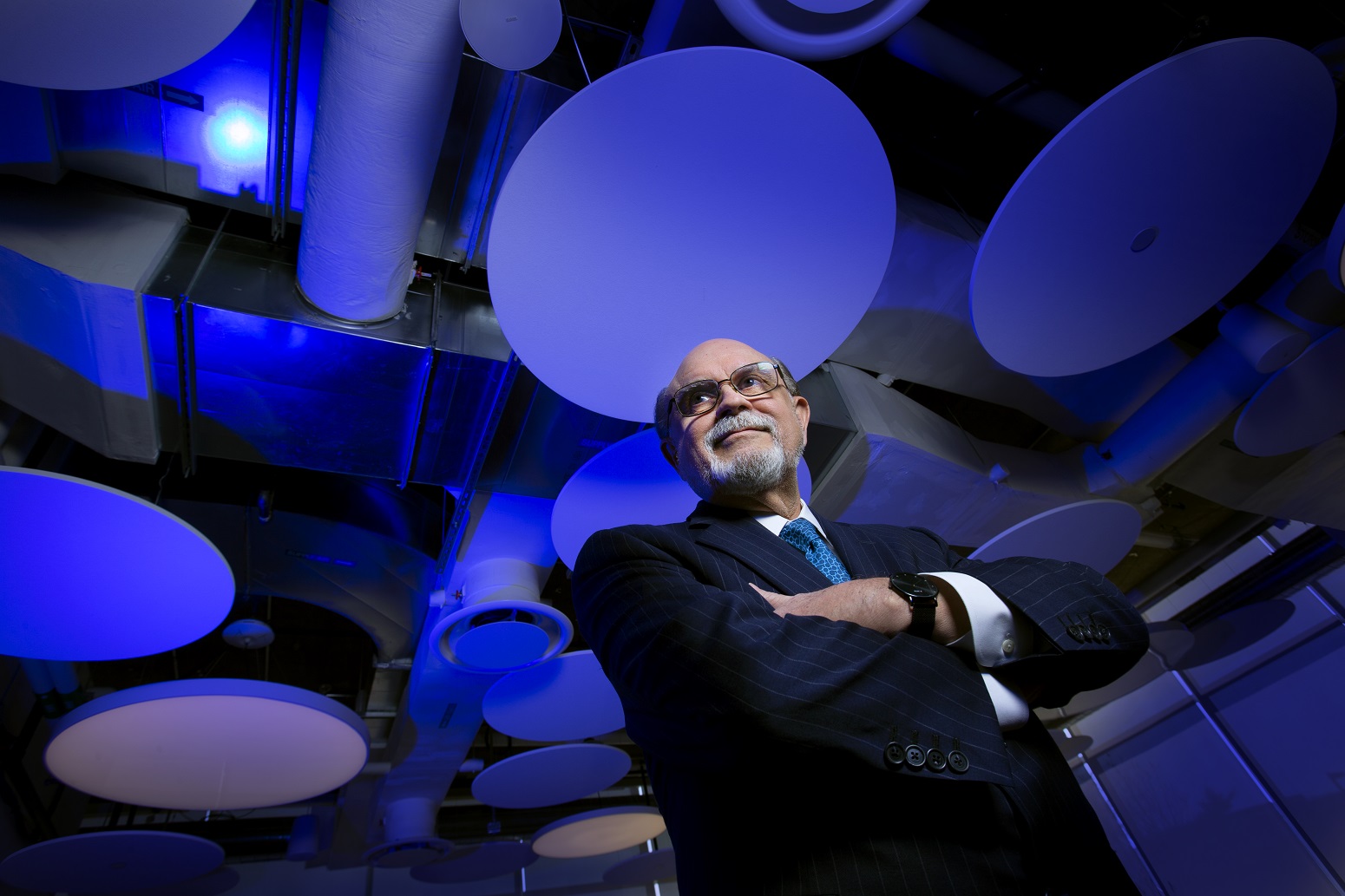 Scene: Pulling back from a chalkboard full of equations at the University of Maryland, Fernandez sits with an inward gaze, his attention wandering. It’s the weekly “mystery hour,” where befuddled students huddle to interpret the lessons delivered to them by a professor who frowns on questions. Fernandez passes a note to Bezos, a close friend and fellow Cuban immigrant. Do you want to start a company? He expects Bezos to ask questions; he doesn’t expect to receive a note back in 10 seconds, or that a single written word could somehow be so deadpan. Yes.

Scene: In spring 1969, the Space Race is in full swing; Fernandez has a freshly minted degree from Maryland Engineering. But he cannot join the flood of engineers rushing into sexy NASA jobs—not yet a citizen, he is ineligible for the necessary security clearance. He observes the tide and thinks, “There must be an increased need for engineers in underserved essential sectors. Printing. Textiles. Railroads.”

Scene: Just months after graduation in Fernandez’s first job with Southern Railway, a labor strike compels railroad management to run the trains. Fernandez finds himself cursing, bedeviled by riding in a caboose. Near the Blue Ridge Mountains, the cars of the train stretch out wildly as they climb and slam together as they descend, snapping like the tip of a whip. There’s got to be a better way, Fernandez says to himself. The seed of an idea grows: a device that can monitor destructive forces at the rear of the train and communicate them to the locomotive.

Years after that experience, Fernandez made the microelectronic end-of-train monitor a reality. He and Bezos worked on the prototype in their spare time, developing a simple device that affixes to the rear of a train. Powered by pressure from the air brake lines—technology now considered standard—the monitor transmits information about the integrity of the train. The system eventually evolved to allow the train engineer to apply emergency brakes in the back.

The practical effects of this technology were many, significantly reducing operational costs and improving safety. The invention launched Fernandez’s career in earnest; the original prototype is now in the Smithsonian.

And what of Fernandez’s nemesis, the caboose? Its days were numbered: “Mighty Microchip Derails the Caboose,” declared a 1985 article in The Washington Post newspaper about the invention.

Fernandez and Bezos left their full-time day jobs in 1977 to formally launch and grow their startup, Pulse Electronics. The company flourished and was later acquired by Westinghouse Air Brake Company (which became Wabtec); Fernandez is still vice chairman. With production plants around the world, Wabtec is today one of the world’s leading suppliers of electronic controls for rail and other transport systems. 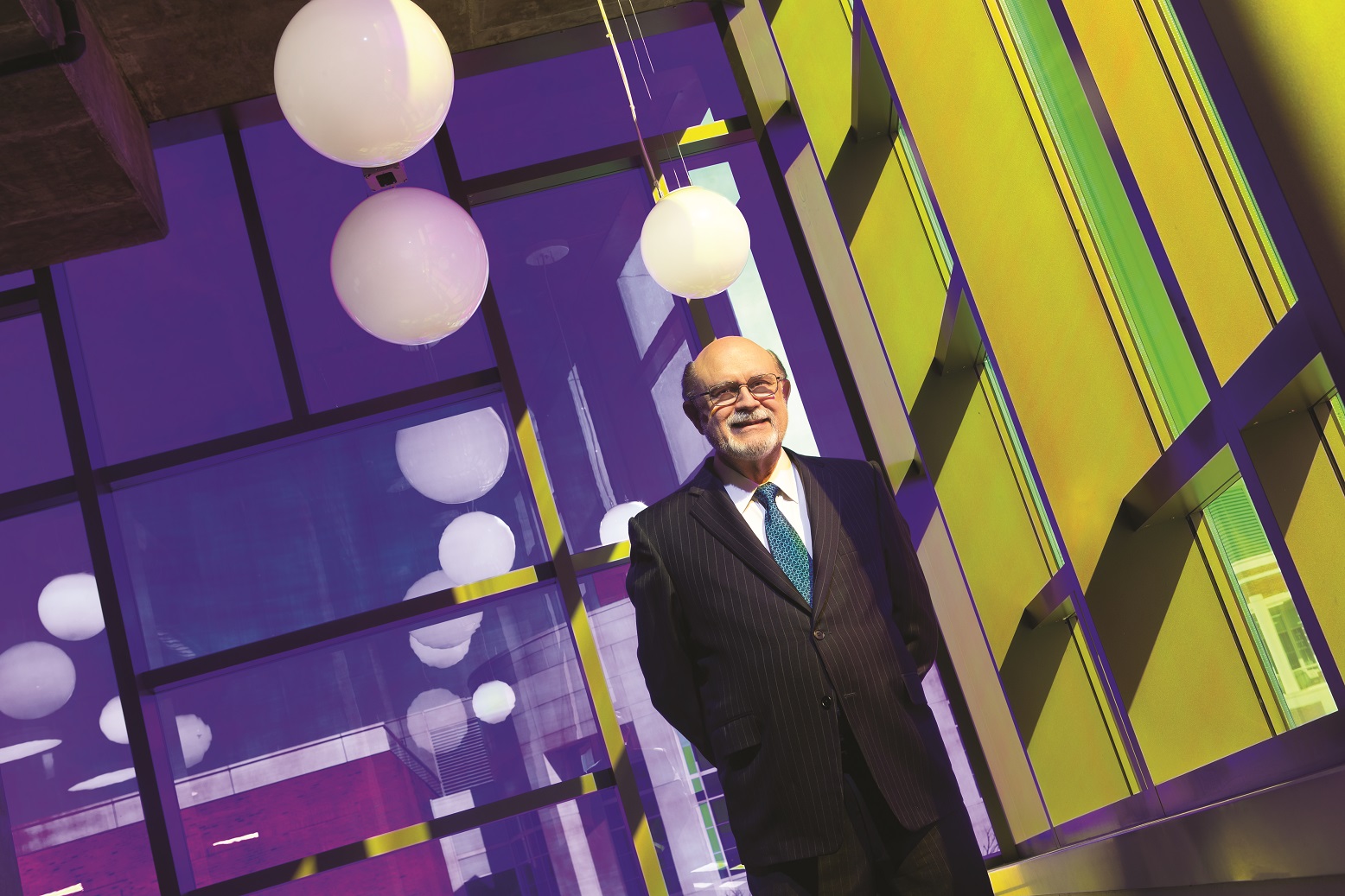 Bezos says that Fernandez’s practical, business-minded approach to innovation is a key inspiration for the IDEA Factory—and is reflected in dedicated student spaces for the Startup Shell, an accelerator for student creators and entrepreneurs to collaborate on building the future, and ALEx Garage, a forum for student competition teams that’s inspired by Fernandez’s early tinkering and discovery through disassembly.

“Awakening the entrepreneurial spirit and opening students’ eyes to challenges and opportunities is critical,” Bezos says. “The IDEA Factory is specifically designed to spark students’ interest in innovative new ideas, and to generate the momentum to transform those ideas into reality.”

Fernandez’s experiences as an immigrant—working to overcome obstacles, navigating problems through creativity—have likewise underpinned his drive, his success, and his vision for the IDEA Factory.

“Emilio is a proud immigrant, and has an unassuming, creative, innovative mind,” says Pines. “He wants to inspire others to achieve their dreams, as well.”

An invitation to come inside

The newest building on Maryland’s College Park campus arrests attention and commands passersby to stop and stare. It seems to float despite its monolithic upper stories. Huge plates of color-shifting, iridescent dichroic glass interrupt the structure’s broad, pale façade. Depending on where you stand, the IDEA Factory appears as a totally different building.

When design discussions were underway, Fernandez and Pines agreed: The building itself needed to send a signal. Look at this impossible thing, like a block floating in air. But it’s not impossible. Anything is possible. Dreamers, doers, inventors, entrepreneurs: come in.

Inside, the IDEA Factory houses centers in a variety of disciplines. On the topmost levels, soaring ceilings and a heavy-lift crane enable the evolution of Maryland Engineering’s Gessow Rotorcraft Center, dedicated to advancing aeromechanics—one of only three such centers in the United States.

On the third floor, students and researchers at the Maryland Robotics Center’s Robotics and Autonomy Lab expand on innovations in miniaturization, swarm technology, and bioinspired and autonomous robots. Interdisciplinary research and real-world applications are at the forefront of the lab’s mission.

A bright, open space for collaborative conversation, the second-floor café is a place to bring people together over meals, and to provide meeting space for brainstorming.

On the ground floor, ALEx Garage is a space dedicated to student competition and all of the conceptualizing required to come up with novel approaches on a shoestring. Nearby, the Startup Shell (which was founded out of a storage closet in 2012) provides coworking space and an incubator pipeline for student-run startups—like Pulse Electronics—to grow beyond campus.

Downstairs in the basement and shielded from vibrations from the street and the Rotorcraft Center above, the Quantum Technology Center’s focus is on transforming Maryland’s cutting-edge quantum computing research into applied technologies.

Fernandez sees these centers as the solid core of a limitless sphere of possibility for innovation. He also sees the potential for working across disciplines, both within engineering and across the university—and even beyond campus to include companies and other organizations. 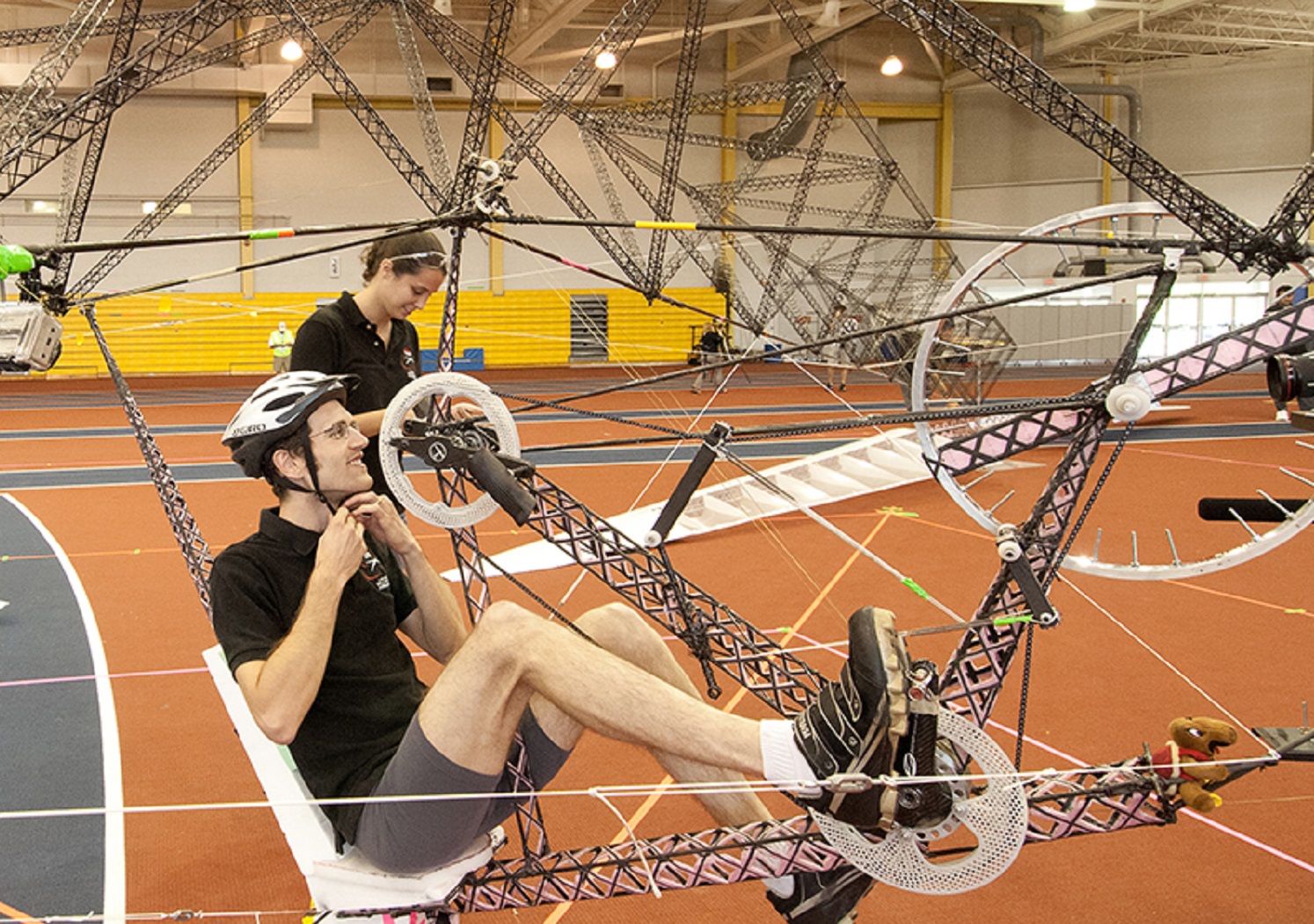 “Today’s problems are complex, and they require interdisciplinary solutions,” says Fernandez. “We need to create and hone that engine, which can enhance the fabric of the university.”

Tom Scholl, who serves on Maryland Engineering’s Board of Visitors along with Fernandez, says that good ideas aren’t limited to the technical.

“We hope to engender a culture from day one in which good ideas happen, and it doesn’t matter where they come from,” says Scholl, whose IDEA Factory gift names the entire student focused first floor enterprise. “The IDEA Factory will be a home for the entire campus to develop their ideas.”

The processes envisioned to unspool in the IDEA Factory are inclusive, considerate, and participatory—just how Pines describes Fernandez’s own collaborative nature.

“Before he comes to a conclusion, Emilio wants to hear your side and wants you to participate in the creative thinking process,” Pines says. “It’s a joyful process for him, he brings others along—and we’re happy to follow.”

Bezos calls the IDEA Factory a “win-win-win,” important to him personally, to the university, and even to the country. “We’ve made a lot of progress [in science], but there is still much that is not known,” he says. “Newton said, ‘What we know is a drop, what we don’t know is an ocean.’ I think that’s still the case—and I hope that in the IDEA Factory, somebody will find a few more of those drops still out there in the ocean.”

Though research in silos happens out of necessity, Fernandez stresses the importance of students getting out, taking a deep breath, and looking with fresh eyes at their impact on society. It is crucial, he says, for students to find meaning in their work—work that will change the world.

“We need to cultivate the individualism of each student as best as we can,” Fernandez says. “Once they begin to realize that they’re individuals with common tools and techniques that can be used in different ways, they can apply themselves to areas that resonate, where they feel comfortable.”

And for the students who find their way to the IDEA Factory’s doors, Fernandez has an invitation and challenge: “We can teach you how to use the hammer and chisel—but the sculpture? That’s up to you—and you can do it.”