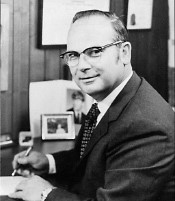 Inducted in May 1989 for his many innovations in fluidics and fluid mechanics.

Considered to be the father of fluidics, Bowles is the holder of 56 patents—most of which pertain to the use of fluid mechanics in engineering applications. He has received the John Scott Medal from the Franklin Institute, the National Fluid Power Association Achievement Award, and the Washington Academy of Sciences Outstanding Achievement Award for the Technical Sciences. An alumnus of the College of Engineering, he received the B.S., M.S., and Ph.D. degrees in mechanical engineering. In 1977, he was awarded the College of Engineering Distinguished Alumnus Award.