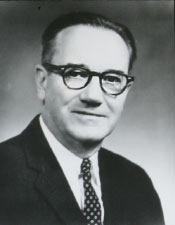 Posthumously inducted in May 1992 in recognition of significant contributions to the fields of multiplexing and long-distance telephony.

Robert Surguy Caruthers received the Bachelor of Science in Electrical Engineering from the University of Maryland at College Park in 1926 and received a master’s degree in electrical engineering in 1928 from MIT. In the decades before and after World War II, he participated in most of the major wire and cable communications developments in the Bell System, contributing fundamental improvements in electronic methods and circuitry. During his long career, he worked for Bell Telephone Laboratories, GTE, and ITT. He was awarded 25 patents, several of which were critical to trunk line telephone system development. He served on various international technical committees and was a consultant to Mexican and Japanese communications organizations. He received the Goddard Medal from NASA for work related to a satellite communications system, was elected a Fellow of the IRE (which later became the Institute of Electrical and Electronic Engineers), and was a member of Tau Beta Pi, Phi Kappa Phi, and Telephone Pioneers of America. Caruthers passed away in 1978.