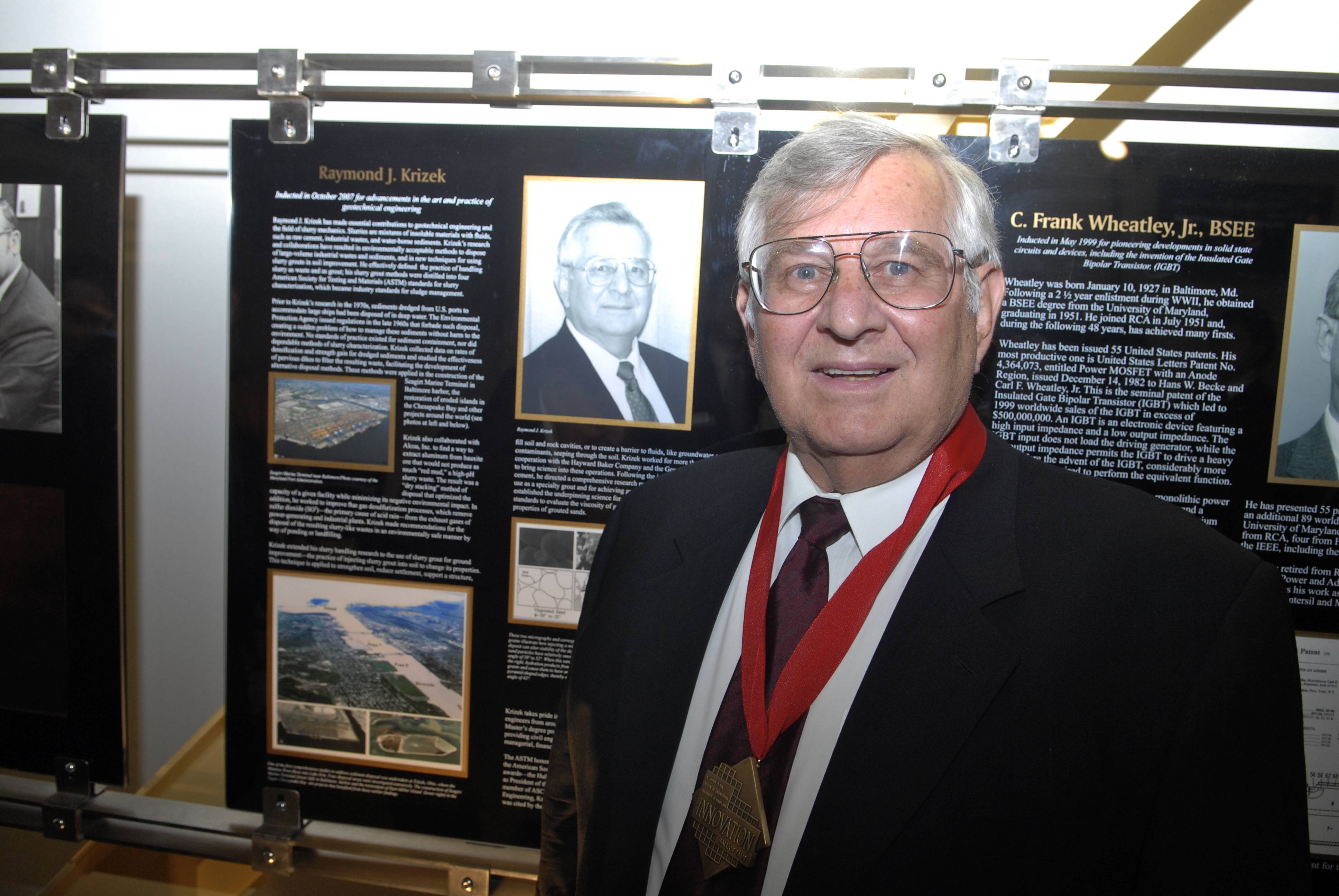 Inducted in October 2007 for advancements in the art and practice of geotechnical engineering.

Raymond J. Krizek has made essential contributions to geotechnical engineering and the field of slurry mechanics. Slurries are mixtures of insoluble materials with fluids, such as raw cement, industrial wastes, and water-borne sediments. Krizek’s research and collaborations have resulted in environmentally acceptable methods to dispose of large-volume industrial wastes and sediments, and in new techniques for using slurry grouts in soil improvement. He effectively defined the practice of handling slurry as waste and as grout; his slurry grout methods were distilled into four American Society for Testing and Materials (ASTM) standards for slurry characterization, which became industry standards for sludge management.

Prior to Krizek’s research in the 1970s, sediments dredged from U.S. ports to accommodate large ships had been disposed of in deep water. The Environmental Protection Agency issued regulations in the late 1960s that forbade such disposal, creating a sudden problem of how to manage these sediments without harm to the environment. No standards of practice existed for sediment containment, nor did dependable methods of slurry characterization. Krizek collected data on rates of densification and strength gain for dredged sediments and studied the effectiveness of pervious dikes to filter the resulting waste, facilitating the development of alternative disposal methods. These methods were applied in the construction of the Seagirt Marine Terminal in Baltimore harbor, the restoration of eroded islands in the Chesapeake Bay and other projects around the world.

Krizek also collaborated with Alcoa, Inc. to find a way to extract aluminum from bauxite ore that would not produce as much “red mud,” a high-pH slurry waste. The result was a “dry stacking” method of disposal that optimized the capacity of a given facility while minimizing its negative environmental impact. In addition, he worked to improve flue gas desulfurization processes, which remove sulfur dioxide (SO²)—the primary cause of acid rain—from the exhaust gases of power-generating and industrial plants. Krizek made recommendations for the disposal of the resulting slurry-like wastes in an environmentally safe manner by way of ponding or landfilling.

Krizek extended his slurry handling research to the use of slurry grout for ground improvement—the practice of injecting slurry grout into soil to change its properties. This technique is applied to strengthen soil, reduce settlement, support a structure, fill soil and rock cavities, or to create a barrier to fluids, like groundwater or contaminants, seeping through the soil. Krizek worked for more than 20 years in cooperation with the Hayward Baker Company and the Geochemical Corporation to bring science into these operations. Following the introduction of microfine cement, he directed a comprehensive research program to develop criteria for its use as a specialty grout and for achieving greater grouting economy. This work established the underpinning science for the development of four ASTM standards to evaluate the viscosity of grout and to predict the mechanical properties of grouted sands.

Born and raised near Baltimore, Md., Krizek received his bachelor’s degree from Johns Hopkins University in 1954. Following work with the U.S. Army Corps of Engineers, he began his academic career at the University of Maryland in 1957, where he taught for four years as an instructor and earned his Master’s degree in 1961. After receiving his doctorate from Northwestern University in 1963, he began his 44-year tenure there on the civil engineering faculty, serving as chair from 1980 to 1992. He now holds the Stanley F. Pepper Endowed Chair at Northwestern.

Krizek takes pride in challenging, educating, and instilling professional values in engineers from around the world. He established and now directs a professional Master’s degree program in project management at Northwestern aimed at providing civil engineers and architects with a holistic overview of the technical, managerial, financial, and social challenges in engineering.

The ASTM honored Krizek’s contributions with the Hogentogler Award; as did the American Society of Civil Engineers (ASCE) with two of its most prestigious awards—the Huber Research Prize and the Karl Terzaghi Award. Krizek served as President of the Geo-Institute of ASCE and he was named an honorary member of ASCE in 2002. An elected member of the (US) National Academy of Engineering, Krizek has been recognized by the equivalent body in Spain, and was cited by the French Ministry of Education for his contributions.