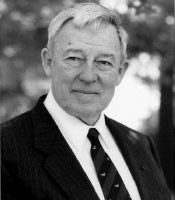 Inducted in May 1998 for pioneering work and outstanding contributions in the area of kinetic theory of transport phenomena in polymeric fluids.

R. Byron Bird established the subject of transport phenomena as a distinct discipline in chemical engineering. The landmark book, Transport Phenomena, co-authored with Stewart and Lightfoot, illustrated how the conservation laws of mass, momentum and energy can be applied at: 1) the molecular level in the development of kinetic theory; 2) the continuum level in the development of equations of change; and 3) the macroscopic balances for large pieces of equipment. In his research he has been involved with applying these principles to the dynamics of polymeric fluids, from both the continuum and the molecular points of view, and revealing some remarkable counter-intuitive flow phenomena.

Bird has received numerous awards. Among these are the William H. Walker Award, the Donald L. Katz Award, the Bingham Medal, the Warren K. Lewis Award, the Corcoran Award, the Hilldale Award, and the Founders Award of the American Institute of Chemical Engineers. In 1998, Bird was the first recipient of the Distinguished Chemical Engineering Alumnus Award from the University of Maryland.