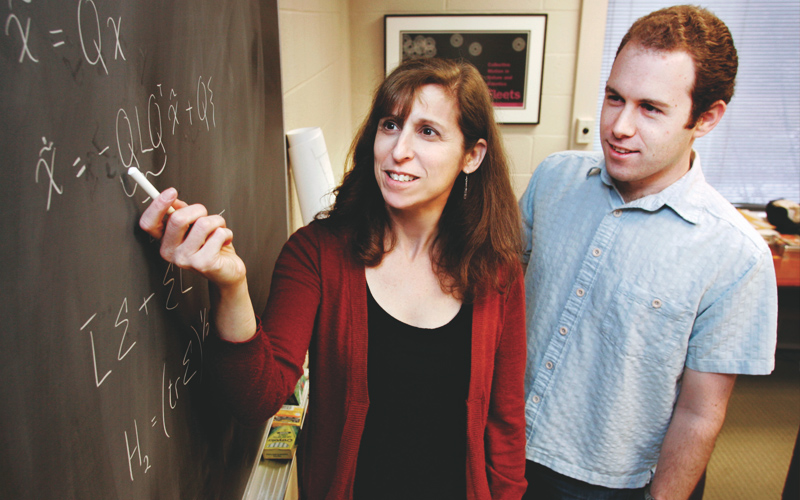 Inducted in 2015 for her research in the field of control and dynamical systems, where she has made contributions both to theory and to application.

Dr. Naomi Ehrich Leonard has developed methodologies for the systematic investigation and design of feedback mechanisms that enable individual agents—whether living organisms or robotic vehicles—to perform as a group by coordinating decision-making, sensing, and motion. In her early work, the agent’s responsive rules achieve the desired moving group formation through forces of attraction, repulsion, and alignment. With agents also responding to the environment, the group can climb gradients, track level sets in the sampled field, and even realize motion patterns that maximize information in sensor measurements. She developed rigorous means to show how features of agent interconnections, such as who is communicating with whom, determine group performance, such as robustness to uncertainty and flexibility in a changing environment.

Prior to studying multi-agent systems, Dr. Leonard developed a body of work on the control of mechanical systems derived from first principles and methods from geometric mechanics. She focused first on the theory of rigid bodies in a fluid, which she applied to autonomous underwater vehicles and marine robotics. This focus led to seminal work on dynamics and control of buoyancy-driven underwater gliders, a class of autonomous vehicle now used all over the world. It also led to her collaboration on the derivation of the method of controlled Lagrangians—a nonlinear, energy-based method for stabilization of underactuated mechanical systems with symmetry.

Dr. Leonard’s methods have been used to help explain the remarkable behaviors observed in animal groups, including starling flocks, honeybee swarms, and fish schools, and to design the decision-making behaviors of networks of autonomous vehicles in missions that include environmental monitoring and exploration. She led a large, multi-disciplinary team in a first-of-its-kind effort to develop adaptive and sustainable ocean observing systems using the coordinated motion of a fleet of autonomous underwater gliders. A month-long field experiment in Monterey Bay, California, provided an unprecedented data set and demonstrated the enormous potential of coordinated control of autonomous vehicles.

Her contributions have produced myriad new theoretical investigations by a large community of academic researchers in engineering, mathematics, physics, and biology on topics ranging from geometric mechanics and control to social decision-making dynamics. She is also inspiring investigation at the intersection of engineering and art, as co-creator of Flock Logic, an art-making project that explores what happens when dancers carry out the rules used to model flocking birds.

Dr. Leonard is the Edwin S. Wilsey Professor of Mechanical and Aerospace Engineering and associated faculty member of the Program in Applied and Computational Mathematics at Princeton University. She received a BSE in Mechanical Engineering from Princeton University and MS and PhD degrees from the Electrical and Computer Engineering Department at the University of Maryland. She is a MacArthur Fellow, a member of the American Academy of Arts and Sciences, and a Fellow of ASME, IEEE, IFAC, and SIAM.