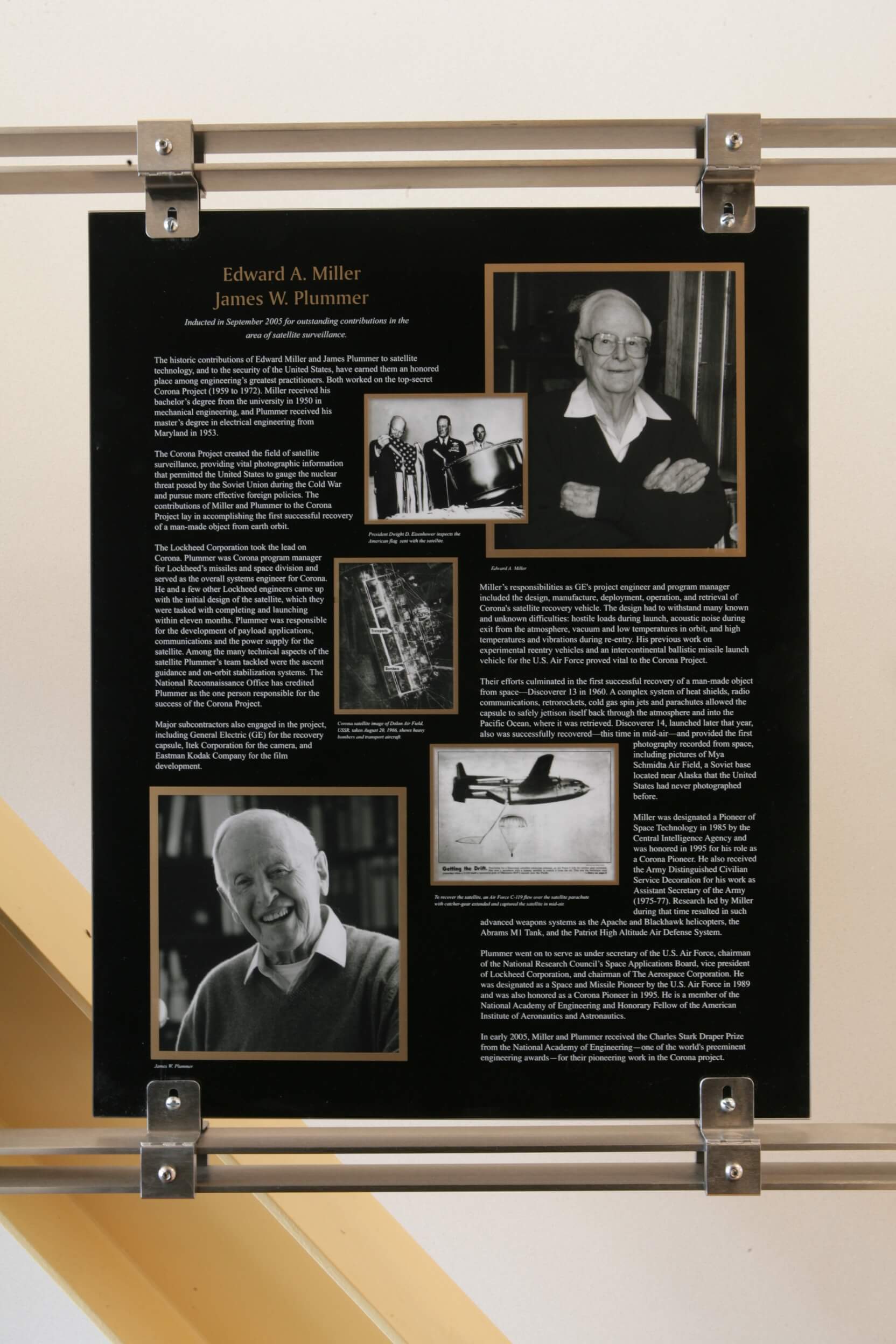 Inducted in September 2005 for outstanding contributions in the area of satellite surveillance.

The historic contributions of Edward Miller and James Plummer to satellite technology, and to the security of the United States, have earned them an honored place among engineering’s greatest practitioners. Both worked on the top-secret Corona Project (1959 to 1972). Miller received his bachelor’s degree from the university in 1950 in mechanical engineering, and Plummer received his master’s degree in electrical engineering from Maryland in 1953.

The Corona Project created the field of satellite surveillance, providing vital photographic information that permitted the United States to gauge the nuclear threat posed by the Soviet Union during the Cold War and pursue more effective foreign policies. The contributions of Miller and Plummer to the Corona Project lay in accomplishing the first successful recovery of a man-made object from earth orbit.

The Lockheed Corporation took the lead on Corona. Plummer was Corona program manager for Lockheed’s missiles and space division and served as the overall systems engineer for Corona. He and a few other Lockheed engineers came up with the initial design of the satellite, which they were tasked with completing and launching within eleven months. Plummer was responsible for the development of payload applications, communications and the power supply for the satellite. Among the many technical aspects of the satellite Plummer’s team tackled were the ascent guidance and on-orbit stabilization systems. The National Reconnaissance Office has credited Plummer as the one person responsible for the success of the Corona Project.

Major subcontractors also engaged in the project, including General Electric (GE) for the recovery capsule, Itek Corporation for the camera, and Eastman Kodak Company for the film development.

Miller’s responsibilities as GE’s project engineer and program manager included the design, manufacture, deployment, operation, and retrieval of Corona’s satellite recovery vehicle. The design had to withstand many known and unknown difficulties: hostile loads during launch, acoustic noise during exit from the atmosphere, vacuum and low temperatures in orbit, and high temperatures and vibrations during re-entry. His previous work on experimental reentry vehicles and an intercontinental ballistic missile launch vehicle for the U.S. Air Force proved vital to the Corona Project.

Their efforts culminated in the first successful recovery of a man-made object from space—Discoverer 13 in 1960. A complex system of heat shields, radio communications, retrorockets, cold gas spin jets and parachutes allowed the capsule to safely jettison itself back through the atmosphere and into the Pacific Ocean, where it was retrieved. Discoverer 14, launched later that year, also was successfully recovered—this time in mid-air—and provided the first photography recorded from space, including pictures of Mya Schmidta Air Field, a Soviet base located near Alaska that the United States had never photographed before.

Miller was designated a Pioneer of Space Technology in 1985 by the Central Intelligence Agency and was honored in 1995 for his role as a Corona Pioneer. He also received the Army Distinguished Civilian Service Decoration for his work as Assistant Secretary of the Army (1975-77). Research led by Miller during that time resulted in such advanced weapons systems as the Apache and Blackhawk helicopters, the Abrams M1 Tank, and the Patriot High Altitude Air Defense System.

Plummer went on to serve as under secretary of the U.S. Air Force, chairman of the National Research Council’s Space Applications Board, vice president of Lockheed Corporation, and chairman of The Aerospace Corporation. He was designated as a Space and Missile Pioneer by the U.S. Air Force in 1989 and was also honored as a Corona Pioneer in 1995. He is a member of the National Academy of Engineering and Honorary Fellow of the American Institute of Aeronautics and Astronautics.

In early 2005, Miller and Plummer received the Charles Stark Draper Prize from the National Academy of Engineering—one of the world’s preeminent engineering awards—for their pioneering work in the Corona project.