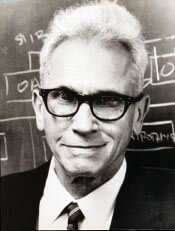 Inducted in May 1988 for conceiving the idea of coherent microwave emissions which led to the development of the maser and laser.

In his classic paper, published in 1953, Weber described a scheme by which a microwave amplifier could be built using ammonia molecules. One year later, researchers reported the operation of the first maser and cited Weber as one of the independent co-developers. His research has also contributed to the development of the laser and the large field of research and development in what is variously termed quantum electronics, optical electronics, and photonics. In 1958 he received the Washington Academy of Sciences Award for research on Quantum Mechanical Amplifiers and was named a fellow of the American Physical Society and Institute of Electrical and Electronics Engineers. He was a Professor in the Department of Electrical Engineering at the University of Maryland from 1948 to 1961. Since 1961, he has been a Professor in the Department of Physics. He received a B.S. in 1940 from the United States Naval Academy and Ph.D. in 1951 from the Catholic University of America.

Accurate accounts of Weber’s work at the University of Maryland are given by Nobel Laureates Kastler and Townes. In Nature Volume 316, July 25, 1985, Kastler states: “It was at a conference in Ottawa in 1952 that Weber first mentioned publicly the principle of the maser, the text of his lecture appearing in print a year later. The work of Townes and colleagues on the ammonia maser appeared in 1955, a year after the first publication on the subject by Basov and Prokhorov.”

In Proceedings of the National Academy of Sciences USA 80 (1983) Townes wrote: “The maser itself came from microwave spectroscopy. The general idea was developed independently at three places, by Weber at the University of Maryland, by Basov and Prokhorov at the Lebedev Institute in the Soviet Union and by myself at Columbia University.”