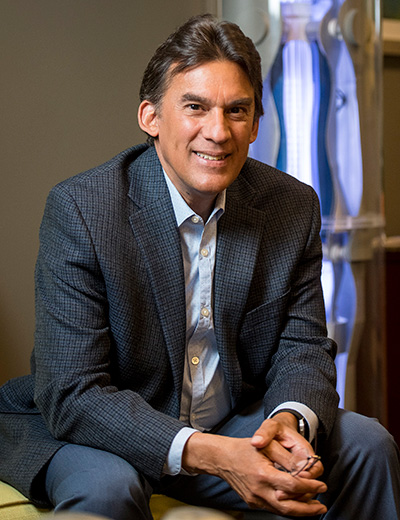 Dr. José Reyes, (M.S. 1984, Ph.D. 1986, Nuclear Engineering), is an internationally-recognized innovator and expert on passive safety system design, testing and operations for nuclear power plants. He is the co-founder of NuScale Power and co-designer of its passively-cooled small nuclear reactor, the first small modular reactor to receive approval by the U.S. Nuclear Regulatory Commission.

Dr. Reyes’ work was born from a passion for addressing the world’s growing global energy demand while tackling what he identifies as the greatest challenge facing our planet: climate change. Dr. Reyes recognized nuclear energy as a critical solution to this challenge. His work is dedicated to developing scalable advanced nuclear technology for the production of electricity, heat, and clean water, improving lives for people around the world.

After more than a decade of extensive research, testing, and review, Dr. Reyes unveiled a revolutionary small modular reactor design that offers greater reliability and safety without the financial burden, size and complexity of traditional nuclear facilities. The innovative concept incorporates steam generation and heat exchange components into a single integrated vessel that operates independently within a multi-module configuration.

At Oregon State University (OSU), Dr. Reyes served as head of the Department of Nuclear Engineering and Radiation Health Physics. He directed the Advanced Thermal Hydraulic Research Laboratory and was the co-director of the Battelle Energy Alliance Academic Center of Excellence for Thermal Fluids and Reactor Safety in support of the Idaho National Laboratory mission. Dr. Reyes was OSU’s principal investigator for the AP600 and AP1000 design certification test programs sponsored by the U.S. Nuclear Regulatory Commission, the U.S. Department of Energy and Westinghouse. He currently serves as a Professor Emeritus in the School of Nuclear Science and Engineering.

Prior to joining the faculty at OSU in 1987, Dr. Reyes worked nearly 10 years as a thermal hydraulics research engineer in the Reactor Safety Division of the U.S. Nuclear Regulatory Commission. He holds Ph.D. and Master of Science degrees in nuclear engineering from the University of Maryland, and a Bachelor of Science degree in nuclear engineering from the University of Florida. He is the author of numerous journal articles and technical reports, including a chapter on small modular reactors for an American Society of Mechanical Engineers Boiler and Pressure Vessel Codes and Standards handbook.

The tall white pods of NuScale Power’s electric generation modules are reminiscent of super-sized vitamin capsules, unassuming and mellow. Yet within them lies the embodiment of a powerful vision for a cooler, cleaner, less thirsty world: a technology that produces green energy—and clean water.

The figure responsible for this invention is similarly understated. His gentle, warm, and quietly focused demeanor belies a rigorous dedication to research: For the last 20 years, José Reyes (M.S. ’84, Ph.D. ’86) has been researching, building, testing, probing, refining, and real-world-proving the small modular reactor he first drafted in 1999.

At the core of his vision is nuclear as we’ve never seen it before.

“We view nuclear power to be much more than just electrical power production,” Reyes said of NuScale’s vision at his induction to the Clark School’s Innovation Hall of Fame (IHOF) in late 2021. His and his company’s dedication to advancing nuclear technology, Reyes added, is rooted in a razor-sharp focus on “improving the quality of life for people around the world.”

Reyes and NuScale co-founder Paul Lorenzini launched their startup in 2007 with the goal of bringing their revolutionary technology to market. Thirteen years later, in August 2020, NuScale’s small modular reactor design was the first of its kind to be greenlighted for commercialization by the Nuclear Regulatory Commission (NRC).

“Inventors use their knowledge, perseverance, innovation, and ingenuity to change how we do things in the world,” Graham said at Reyes’ IHOF induction. “They see a vision of things that don’t yet exist, and how the world can be a better place.”

A Passion for Humanity

In a world often loud with the din of relentless self-aggrandizement, Reyes’ humble demeanor and selfless approach is striking. He credits his mother, who immigrated to the United States from the Dominican Republic alone and at a young age, with the foundation of his family’s commitment to giving back and giving to others.

“She taught us that we aren’t just here for ourselves,” says Reyes. The lesson is reflected in his siblings’ careers, too: Reyes’ sister is a social worker turned elementary teacher, and his brother is an attorney.

Reyes’ father, a Navy sailor, was often away for months at a time but brought back stories from places as far away as Mozambique and Japan. Reyes says that letters home from his father—also an immigrant, from Honduras—were often quite short. But the impassioned Spanish-language articles he wrote for Honduran newspapers arguing for democracy and greater freedoms were a rootlet for Reyes’ own talent of simple, straightforward storytelling; indeed, Reyes’ son, José III, recounts how, when he was a boy, his father could run his finger down a page of thermodynamic formulas and symbols and read it like a storybook, weaving a magical tale where steam becomes something greater than itself.

By his senior year in high school, Reyes knew he wanted to be a nuclear engineer. Inspired by a book about Oak Ridge National Laboratory gifted to him by his father, he was endlessly fascinated by the idea of harnessing energy from invisible particles—and the power of engineering to make a difference.

As a Ph.D. student at Maryland, Reyes worked down the road at the NRC, the governing body of nuclear safety and approval. Reyes credits the experience with planting a resilient seed of “safety first” into every aspect of his subsequent work.

Professor Mohammad Modarres—director of the Clark School’s Center for Risk and Reliability, and a renowned expert in probabilistic safety assessment of nuclear and other complex engineering systems—served as one of Reyes’ academic mentors and as a technical consultant to NuScale. Modarres notes that, at the same time Reyes was pursuing his doctorate and working full-time at the NRC, he was also raising two children with his wife, Donna, to whom he has been married for 45 years.

“You have to have a specific objective and a lot of determination to accomplish something like that,” Modarres says. “It wasn’t easy.”

It was the realization of the tight link between energy and quality of life that Reyes credits as galvanizing his efforts to make small modular reactors a reality. With 5.9 billion people living in energy poverty, 800 million lacking access to clean water, and 5.5 million dying annually from causes related to air pollution, Reyes sees nuclear as a carbon-free path forward in a changing, challenging world.

A New Kind of Nuclear

Distant from “typical nuclear” in form, the 1-to-12 reactor modules that make up a NuScale power plant are, by comparison, tiny, lacking the sprawling footprint and hulking cooling towers of conventional power plants. NuScale’s size and design offer a nimble flexibility that conventional nuclear plants simply cannot: They are small enough to serve remote, rural communities; power coastal desalination or water treatment plants; or backfill the footprint of a decommissioned coal plant.

They’re also robustly safe. Each module is self-contained and leverages the laws of nature for passive cooling: The reactor can bring itself to a safe condition without needing human or active equipment interventions, alternating current or direct current power, or the need to add water..

Inside, what sets NuScale’s reactor design apart is simplicity. Building on tried-and-true technology, the fuel rods and light water reactors are similar to conventional nuclear power generation; virtually everything else is reduced to their simplest, most elegant forms, with laws of physics serving as the heart of the reactor’s safety features.

Each reactor is contained within a double-hulled design. Inside the reaction chamber, heat from nuclear fission drives the circulation of water via convection, forcing it upwards as it heats, with gravity pulling it downward as it cools. Steam from the hot water is generated in spiraled coils above the reaction chamber.

Should the reactors fail—which has a 1-in-3 billion-year probability of occurrence, according to the risk assessment required for certifying the design—valves open to allow reactor-water steam into the surrounding containment chamber, which itself is submerged in an enormous subterranean cooling pool. Steam condenses on the interior of the containment chamber, transferring heat, again via convection, through the metal jacket of the containment chamber into the pool. The steel-lined concrete cooling pool is capped with a biological shield and housed beneath a Category 1 seismic building, strong enough to withstand the strongest earthquakes possible in a given region.

NuScale’s modular, compact design is also suitable for building smaller plants, ideally on the footprint of decommissioned coal-fired or other plants already wired to the grid. Each module is capable of producing 77 megawatts of electricity; the full “12-pack” design can produce up to 924 megawatts, or roughly double a typical U.S. coal plant.

Modules can be taken offline individually for maintenance or refueling, allowing uninterrupted generation of electricity. This feature also enables plants to quickly scale power production according to demand, especially in concert with renewable sources like solar and wind, or after a natural disaster.

Maria Korsnick (’86), president of the Nuclear Energy Institute, says that interest in a new kind of nuclear reactor from investors, potential customers, and other decision makers has increased rapidly over the last year, since NuScale received its NRC approval.

“The interest in advanced reactors is growing rapidly,” Korsnick says, citing nearly 20 new nuclear projects, from gigawatt-scale to microgrid-sized, in various stages of development. “This shows that nuclear energy can make a significant impact in helping to meet carbon-reduction targets,” she adds.

The ability to contribute to meaningful, actionable solutions “resonates” with NuScale’s nearly 500 engineers and employees, Reyes says. “That’s why they do what they’re doing with us: They want to change the world, and we’re empowering them to do that.”

An Eye to the Future

The small modular reactor’s design makes the technology suitable for areas of the world Reyes is particularly concerned about—places where the too-small grid systems simply can’t support the huge wattage output of conventional nuclear power plants. That could be anywhere from rural Asia to remote areas of the western U.S.—indeed, NuScale’s first commercial contract is with Utah Associated Municipal Power Systems (UAMPS), a 6-unit plant located in Idaho and slated to come online from 2029 to 2030. A six-module project in Romania is also in the works.

Reyes’ vision includes green transportation and clean water. The company is exploring how to harness the availability of high-temperature steam inherent in nuclear electric generation for the purposes of hydrogen production; by splitting water molecules, one NuScale module is capable of generating 50 tons of hydrogen a day, which can be used for automotive fuel cell production or other chemical processes. And for clean water, Reyes says just four of NuScale’s reactors could power a conventional desalination plant and provide enough water for 4 million people; many of these types of plants are currently fueled by carbon-belching natural gas or diesel fuels.

Reyes is encouraged for the future adoption of the technology by the reception NuScale has received from utility operators—he says the company is working with dozens of utilities in the U.S., Canada, and other countries including Poland—on potential future plans—and by the openness of young engineers to the idea of nuclear as a means of tackling climate change.

“I’ve found that younger generations of engineers are less afraid of nuclear power because they understand the technology,” Reyes says. “In many ways, they’re the ones looking at the future, at the risks of global warming and the risks of using nuclear power. We can control nuclear and make it very safe, but it’s very hard to address global warming. I think you do see a generation coming up that understands what we’ve developed here at NuScale.”