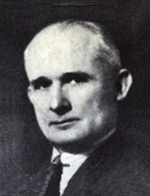 Posthumously inducted in May 1987 for his many innovations in all-metal airplane design.

The recipient of many honors and awards, John E. Younger received the Spirit of St. Louis Gold Medal in 1941 for contributions to the science of aviation. His contributions include the retractable airplane landing gear and tail wheel, the all-metal wing and a device for damping wing flutter. From 1938 to 1958, he was Professor and Chairman of the Department of Mechanical Engineering at the University of Maryland. He received the B.S. degree with honors, M.S. and Ph.D. degrees in Mechanical Engineering from the University of California at Berkeley. Younger passed away in 1958.