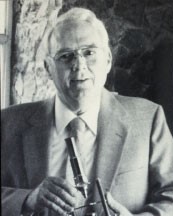 Inducted in May 1987 for his many innovations in optical instruments and the manufacture of soft contact lenses.

Nearly 45 patents associated with optical scientific products have been issued for his inventions. One process he developed shortened, from 20 minutes to less than one minute, the time it took an eye surgeon to insert and fixate an intraocular lens. Since 1958, he held engineering management positions at Bausch & Lomb and at the time of induction was Vice President of Process and Product Development. A native of Washington, D.C., he earned the B.S. and M.S. degrees from the University of Maryland in Mechanical Engineering. In 1978 he received the College of Engineering Distinguished Alumnus Award.