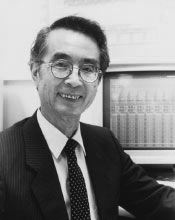 Inducted in May 1990 in recognition of his significant inventions and contributions in semiconductor devices and integrated circuits.

A dedicated and popular instructor, who only missed one class in 21 years, H.C. “Jimmy” Lin retired in 1990 as Professor of Electrical Engineering at the University of Maryland. Well known to his colleagues for his abundant energy, his career has spanned more than half a century and has been punctuated with many patent rights, honors, and awards. Before leaving China in 1947, he was an engineer at the Central Radio Works and Central Broadcasting Administration. In the United States, he was one of the first scientists at RCA Laboratories to work on transistor circuit development. The technology evolved rapidly, and he was the first inventor to incorporate p-n-p or complementary integrated circuits. His industrial experience has also included research and development positions at the Hytron Division of Columbia Broadcasting Systems and Westinghouse Electric Corporation. The holder of 46 U.S. patents, he is known in particular for the invention of the quasi-complementary amplifier used in most commercial audio amplifiers and for the lateral transistor used in most linear integrated circuits and I²L digital integrated circuits. In 1978, IEEE presented him with the J.J. Ebers Award. He received the B.S. in Electrical Engineering in 1941 from Chiaotung University in Shanghai, China, the M.S. degree in 1948 from the University of Michigan, and the Doctor of Electrical Engineering in 1956 from the Polytechnic Institute of Brooklyn. Lin passed away in 2009.