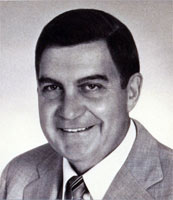 Inducted in May 1987 for invention of pulse Doppler radar and other innovations in airborne electronics.

Of the 15 patents related to electronic systems and circuits issues for his inventions, his most significant contribution was the development of pulse Doppler radar for which he received the David Sarnoff Award in 1962 and the IEEE Pioneer Award in 1984. For ten years he was the President of the Westinghouse Defense and Electronic Systems Center in Baltimore. He earned the B.S. degree in Electrical Engineering from the Missouri School of Mines and M.S. degree from the University of Maryland. Other honors include the University of Maryland College of Engineering Distinguished Alumnus Award in 1982 and an honorary Doctor of Engineering degree from the University of Missouri in 1986.