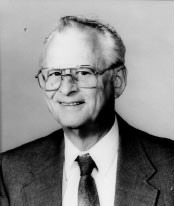 Inducted in May 1997, for “pioneering work and outstanding contributions in the area of supersonic and hypersonic combustion.”

Billig’s primary research has been in the area of highspeed, air-breathing propulsion for advanced flight vehicles including pioneering work in external burning and supersonic combustion. He was responsible for highspeed propulsion programs sponsored by the U.S. Navy, the U.S. Air Force and NASA. He was Program Manager of the National Aerospace Plane (NASP) Project at the Johns Hopkins University, Applied Physics Laboratory (JHU/APL).

In 1964, Billig and Dr. Gordon L. Dugger submitted a patent application for a supersonic combustion ramjet based on Billig’s Ph.D. thesis. This patent was issued in 1981 following the removal of an order of secrecy. Six additional patents involving design features of hypersonic vehicles have followed.

Billig has been honored by numerous awards. These include the Maryland Academy of Science’s Distinguished Young Scientist Award (1966), the Combustion Institute’s Silver Medal (1968), the NASP Pioneer Award (1989) and the JHU/APL lifetime achievement award (1991). In 1991 Billig, a Fellow, past Vice President and Director of American Institute of Aeronautics and Astronautics (AIAA), also received AIAA’s Dryden Research Lectureship for his lifetime of research. In 1992, he was awarded the M.M. Bondaruck Award “as a pioneer of scramjet research” by the Soviet Academy of Sciences and USSR Aviation Sport Federation. He received the Meritorious Civilian Service Award from the Department of the Air Force in 1992 and was elected to the National Academy of Engineering in 1995.

Billig received his undergraduate education at Johns Hopkins University and began his career in their Applied Physics Laboratory in 1955. He entered Maryland’s Department of Mechanical Engineering as a part-time student earning his M.S. degree in 1958 and Ph.D. in 1964 marking the beginning of his 25 year association as an Adjunct Professor in Maryland’s Aerospace Engineering Department.

He retired as Associate Head and Chief Scientist of the Aeronautics Department at the JHU/APL in 1996 and became President of PYRODYNE, Inc. Billig passed away in 2006.