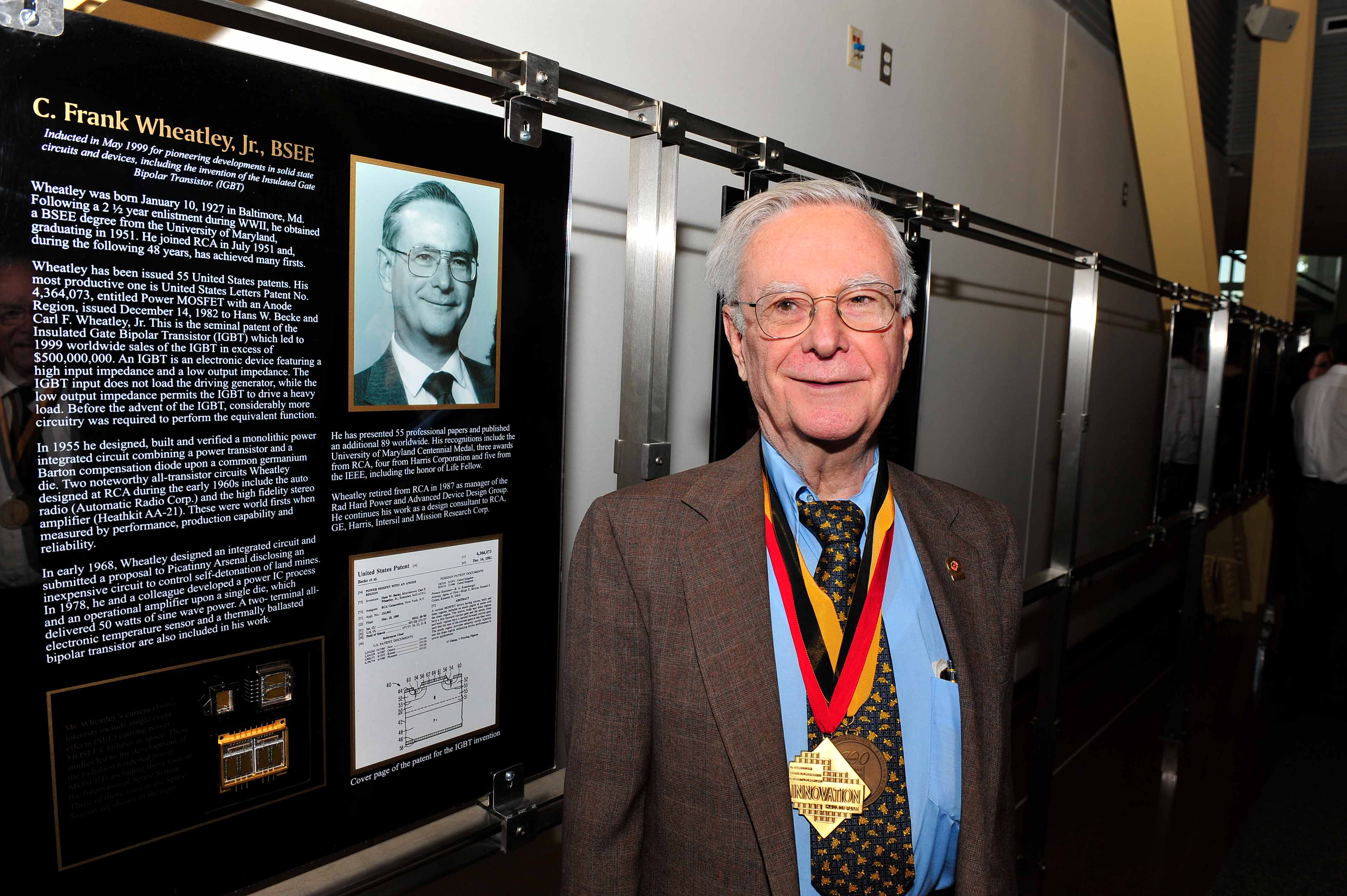 Inducted in May 1999 for pioneering developments in solid state circuits and devices, including the invention of the Insulated Gate Bipolar Transistor (IGBT).

Wheatley was born January 10, 1927 in Baltimore, Md. Following a 2 ½ year enlistment during WWII, he obtained a BSEE degree from the University of Maryland, graduating in 1951. He joined RCA in July 1951 and, during the following 48 years, has achieved many firsts.

Wheatley has been issued 55 United States patents. His most productive one is United States Letters Patent No. 4,364,073, entitled Power MOSFET with an Anode Region, issued December 14, 1982 to Hans W. Becke and Carl F. Wheatley, Jr. This is the seminal patent of the Insulated Gate Bipolar Transistor (IGBT) which led to 1999 worldwide sales of the IGBT in excess of $500,000,000. An IGBT is an electronic device featuring a high input impedance and a low output impedance. The IGBT input does not load the driving generator, while the low output impedance permits the IGBT to drive a heavy load. Before the advent of the IGBT, considerably more circuitry was required to perform the equivalent function.

In 1955 he designed, built and verified a monolithic power integrated circuit combining a power transistor and a Barton compensation diode upon a common germanium die. Two noteworthy all-transistor circuits Wheatley designed at RCA during the early 1960s include the auto radio (Automatic Radio Corp.) and the high fidelity stereo amplifier (Heathkit AA-21). These were world firsts when measured by performance, production capability and reliability.

In early 1968, Wheatley designed an integrated circuit and submitted a proposal to Picatinny Arsenal disclosing an inexpensive circuit to control self-detonation of land mines. In 1978, he and a colleague developed a power IC process and an operational amplifier upon a single die, which delivered 50 watts of sine wave power. A two- terminal all-electronic temperature sensor and a thermally ballasted bipolar transistor are also included in his work.

He has presented 55 professional papers and published an additional 89 worldwide. His recognitions include the University of Maryland Centennial Medal, three awards from RCA, four from Harris Corporation and five from the IEEE, including the honor of Life Fellow.

Wheatley retired from RCA in 1987 as manager of the Rad Hard Power and Advanced Device Design Group. He continues his work as a design consultant to RCA, GE, Harris, Intersil and Mission Research Corp.