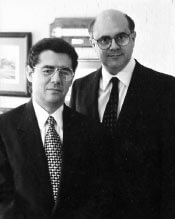 Inducted in May 1994 during the celebration of the Engineering Centennial, in recognition of many innovations for the railroad industry, in particular for the development of end-of-train telemetry systems and locomotive magnetic tape event recorder.

As undergraduates at the University of Maryland, Angel “Angie” Bezos and Emilio Fernandez agreed that they would one day start up their own company. They each earned a B.S. in electrical engineering from the University of Maryland in 1969, and, in 1977, founded Pulse Electronics, Inc. Within a year of the company’s establishment, Bezos and Fernandez pioneered the development of modern railway event recorders with the introduction of magnetic tape recorders, realizing their dream of becoming innovators and entrepreneurs.

Pulse Electronics, an engineering-based company, is now a recognized rail industry leader providing innovative and easy-to-use electronic products and systems designed to improve railroad safety and increase operational savings. “The Hispanic Business of the Year” award was given to Pulse in 1986.

Fernandez is President and Chief Executive Officer of the company. While pursuing his undergraduate degree at Maryland, he worked for several firms engaged in the design and manufacture of telecommunications electronic equipment. After graduating, Fernandez joined the Research and Test Department of Southern Railway and later served as manager of Instrumentation on an international railway research program sponsored by the Association of American Railroads. He earned a Master of Engineering Administration from George Washington University.

Bezos is Senior Vice President of Pulse Electronics and has designed or made significant contributions to the design and development of railroad industry products. He is the holder of fifteen U.S. patents, as inventor or co-inventor with Fernandez. Prior to the establishment of Pulse, Bezos worked for Sperry Rand Corporation, AMF Corporation and the District of Columbia.