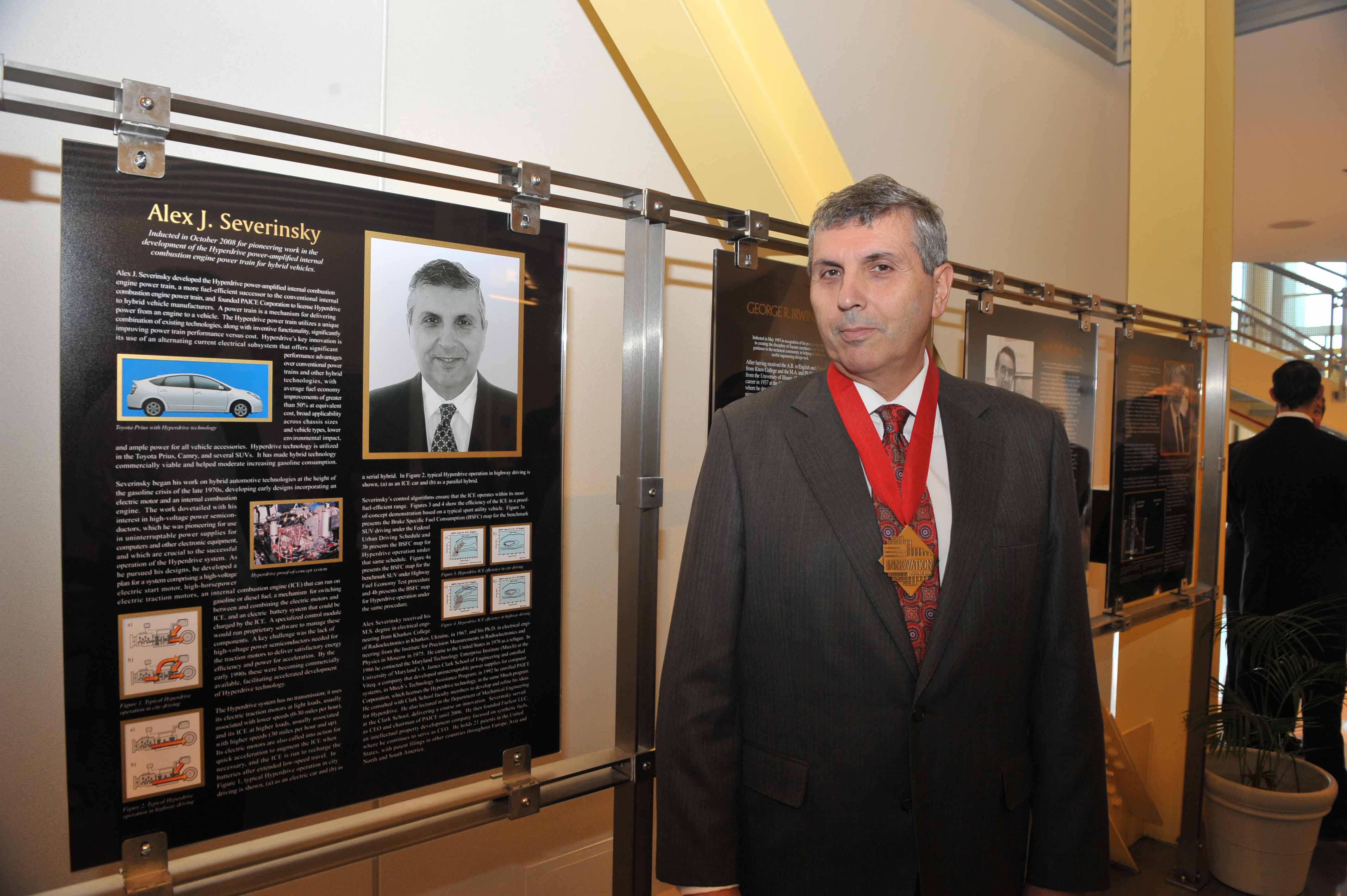 Inducted in October 2008 for pioneering work in the development of the Hyperdrive power-amplified internal combustion engine power train for hybrid vehicles.

Alex J. Severinsky developed the Hyperdrive power-amplified internal combustion engine power train, a more fuel-efficient successor to the conventional internal combustion engine power train, and founded PAICE Corporation to license Hyperdrive to hybrid vehicle manufacturers. A power train is a mechanism for delivering power from an engine to a vehicle. The Hyperdrive power train utilizes a unique combination of existing technologies, along with inventive functionality, significantly improving power train performance versus cost. Hyperdrive’s key innovation is its use of an alternating current electrical subsystem that offers significant performance advantages over conventional power trains and other hybrid technologies, with average fuel economy improvements of greater than 50% at equivalent cost, broad applicability across chassis sizes and vehicle types, lower environmental impact, and ample power for all vehicle accessories.

Severinsky began his work on hybrid automotive technologies at the height of
the gasoline crisis of the late 1970s, developing early designs incorporating an
electric motor and an internal combustion engine. The work dovetailed with his
interest in high-voltage power semiconductors, which he was pioneering for use
in uninterruptable power supplies for computers and other electronic equipment,
and which are crucial to the successful operation of the Hyperdrive system. As
he pursued his designs, he developed a plan for a system comprising a high-voltage electric start motor, high-horsepower electric traction motors, an internal combustion engine (ICE) that can run on gasoline or diesel fuel, a mechanism for switching between and combining the electric motors and ICE, and an electric battery system that could be charged by the ICE. A specialized control module would run proprietary software to manage these components. A key challenge was the lack of high-voltage power semiconductors needed for the traction motors to deliver satisfactory energy efficiency and power for acceleration. By the early 1990s these were becoming commercially available, facilitating accelerated development of Hyperdrive technology.

Alex Severinsky received his M.S. degree in electrical engineering from Kharkov College of Radioelectronics in Kharkov, Ukraine, in 1967, and his Ph.D. in electrical engineering from the Institute for Precision Measurements in Radioelectronics and Physics in Moscow in 1975. He came to the United States in 1978 as a refugee. In 1986 he contacted the Maryland Technology Enterprise Institute (Mtech) at the University of Maryland’s A. James Clark School of Engineering and enrolled Viteq, a company that developed uninterruptable power supplies for computer systems, in Mtech’s Technology Advancement Program; in 1992 he enrolled PAICE Corporation, which licenses the Hyperdrive technology, in the same Mtech program. He consulted with Clark School faculty members to develop and refine his ideas for Hyperdrive. He also lectured in the Department of Mechanical Engineering at the Clark School, delivering a course on innovation. Severinsky served as CEO and chairman of PAICE until 2006. He then founded Fuelcor LLC, an intellectual property development company focused on synthetic fuels, where he continues to serve as CEO. He holds 21 patents in the United States, with patent filings in other countries throughout Europe, Asia and North and South America.