Department of Mechanical Engineering Associate and Keystone Professor Teng Li has won the 2016 Society of Engineering Science (SES) Young Investigator Medal. It is awarded annually to a young researcher whose work has already had an impact in their field within Engineering Sciences. Nominees are only eligible for this honor during the first 10 years after receiving their Ph.D. Li is the first faculty member in the University of Maryland to receive this recognition.

"I’m much obliged to Professor Abhijit Dasgupta for his tremendous efforts in nominating me for this recognition and deeply indebted to the steady support from the college and Mechanical Engineering Department in my past nine years at UMD, not to mention the encouragement and collegiality from my colleagues," said Li. "Without all these, such a recognition would be impossible."

The 2016 SES Young Investigator Medal recognizes Li’s pioneering research on the mechanics of materials and structures in advanced technologies, including flexible electronics, energy systems, nanoelectronics and materials design. His research in such areas has been published in top journals, such as Science, Proceedings of the National Academy of Sciences (PNAS), Physical Review Letters, Nano Letters and ACS Nano, etc.

For example, in a PNAS paper published earlier this year, Li and his team investigated the properties of cellulose fiber paper that became stronger and tougher the smaller fibers got. Their findings could lead to a whole new class of high performance engineering materials that are both strong and tough, a long sought solution in advanced materials design.

Li has also made a unique contribution for the engineering science community at large. He is the co-founder and architect of iMechanica.org, a web of mechanics and mechanicians with the mission to use the Internet to enhance communications among mechanicians in the world, and to pave a way to evolve all knowledge of mechanics online. Launched in September 2006, iMechanica has quickly grown into the largest international community of mechanics, and currently has over 70,000 registered users from all over the world.

Li joined the Mechanical Engineering Department at the University of Maryland in 2006, shortly after receiving his doctorate from Harvard University. During his time at UMD, he has been recognized for both his research and teaching, receiving awards such as the E. Robert Kent Outstanding Teaching Award and the Summer Research and Scholarship Award. He is also a faculty member in the Clark School’s Keystone Program, which includes some of the school’s best faculty to teach fundamental courses in engineering.

As part of this recognition, Li will receive the Society of Engineering Science Young Investigator Medal and an award of $1000. SES is a technical society established to promote the field of engineering science, where science and engineering meet.

UMD Researchers Use a Simple Stretch to Create Powerful... 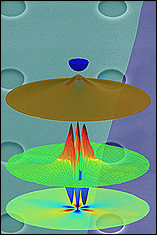