The National Academies of Sciences, Engineering, and Medicine has named Department of Civil and Environmental Engineering Professor Bilal Ayyub to a new committee charged with reviewing the Fourth National Climate Assessment (NCA) during the public comment period.

Mandated by Congress in 1990, NCA is a quadrennial report summarizing the best-available science on observed and projected climate changes, as well as impacts on human health, regions of the country, and tribal communities. The U.S. Global Change Research Program released a draft of the fourth report—known as NCA4—in early November. The final report is expected to be delivered in late 2018.

Ayyub and other members of the committee will provide feedback on a broad range of criteria—from compliance with the Global Change Research Act to alignment with the peer-reviewed scientific literature to message clarity. The nine-month project will produce a report consisting of reviews and comments addressing questions defined in the committee charge.

Ayyub is the director of the Center for Technology and Systems Management, an affiliate professor of reliability engineering, and an affiliate professor of applied mathematics and scientific computation. He is also a chair professor at Tongji University in Shanghai, China. His research focuses on risk, uncertainty, decisions, and systems applied to civil, mechanical, infrastructure, energy, defense, and maritime fields. 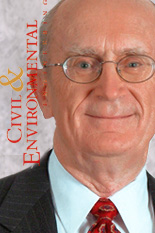