The U.S. Department of Energy (DOE) has announced that it will award the University of Maryland an Energy Frontier Research Center (EFRC) as part of a major new program.

Led by Clark School Professor Gary Rubloff (materials science and engineering and Institute for Systems Research) as director and Professor Sang Bok Lee (College of Chemical and Life Sciences) as associate director, the Maryland research team leading the EFRC includes faculty groups from three colleges – the Clark School, Chemical and Life Sciences, and Computer, Math and Physical Sciences – who are part of the University of Maryland Energy Research Center (UMERC) and the Maryland NanoCenter.

EFRCs are a means to enlist the talents and skills of the very best American scientists and engineers to address current fundamental scientific roadblocks to U.S. energy security (http://www.sc.doe.gov/bes/EFRC.html).

The EFRCs will address energy and science "grand challenges" in a broad range of research areas defined by the DOE Office of Science.

The University of Maryland EFRC will address the "Science of Precision Multifunctional Nanostructures for Electrical Energy Storage." Its objective is to understand how nanostructures formed from multiple materials behave and their potential for a new generation of electrical energy storage technology.

Following is a description of the research to be undertaken under Rubloff's direction, from the DOE announcement:

"Nano-structured electrodes offer vastly greater surface area and smaller path lengths for motion of electrons and ions, increasing the rate at which charges can be moved and stored, leading to much increased power and energy density and faster charging. By using materials in precisely built nanostructures, energy storage devices will hold more energy, will charge or deliver electricity faster, and remain stable for longer lifetimes, while reducing space and weight. This EFRC includes the planned collaborations with scientists from the University of Florida, Yale University, the University of California, Irvine, Sandia National Laboratories, and Los Alamos National Laboratory, including the Center for Integrated Nanotechnologies at Los Alamos and Sandia." 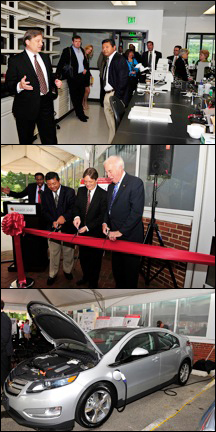