Fischell Department of Bioengineering (BIOE) researchers have developed a microscopy technique that could one day be used to improve LASIK and eliminate the “surgery” aspect of the procedure. Their findings were published in March in Physical Review Letters.

In the 20 years since the FDA first approved LASIK surgery, more than 10 million Americans have had the procedure done to correct their vision. When performed on both eyes, the entire procedure takes about 20 minutes and can rid patients of the need to wear glasses or contact lenses.

While LASIK has a very high success rate, virtually every procedure involves an element of guesswork. This is because doctors have no way to precisely measure the refractive properties of the eye. Instead, they rely heavily on approximations that correlate with the patient’s vision acuity—how close to 20/20 he or she can see without the aid of glasses or contacts. 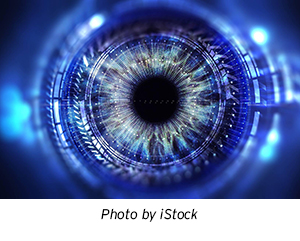 In search of a solution, BIOE Assistant Professor Giuliano Scarcelli and members of his Optics Biotech Laboratory have developed a microscopy technique that could allow doctors to perform LASIK using precise measurements of how the eye focuses light, instead of approximations.

"This could represent a tremendous first for LASIK and other refractive procedures,” Scarcelli said. “Light is focused by the eye’s cornea because of its shape and what is known as its refractive index. But until now, we could only measure its shape. Thus, today’s refractive procedures rely solely on observed changes to the cornea, and they are not always accurate.”

The cornea—the outermost layer of the eye—functions like a window that controls and focuses light that enters the eye. When light strikes the cornea, it is bent—or refracted. The lens then fine-tunes the light’s path to produce a sharp image onto the retina, which converts the light into electrical impulses that are interpreted by the brain as images. Common vision problems, such as nearsightedness or farsightedness, are caused by the eye’s inability to sharply focus an image onto the retina.

To fix this, LASIK surgeons use lasers to alter the shape of the cornea and change its focal point. But, they do this without any ability to precisely measure how much the path of light is bent when it enters the cornea. 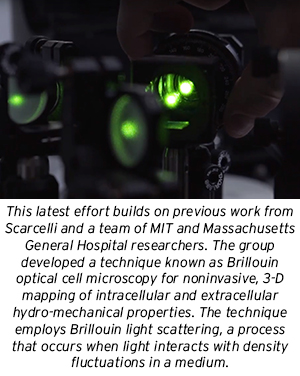 To measure the path light takes, one needs to measure a quantity known as the refractive index; it represents the ratio of the velocity of light in a vacuum to its velocity in a particular material.

By mapping the distribution and variations of the local refractive index within the eye, doctors would know the precise degree of corneal refraction. Equipped with this information, they could better tailor the LASIK procedure such that, rather than improved vision, patients could expect to walk away with perfect vision—or vision that tops 20/20.

Even more, doctors might no longer need to cut into the cornea.

“Non-ablative technologies are already being developed to change the refractive index of the cornea, locally, using a laser,” Scarcelli said. “Providing local refractive index measurements will be critical for their success.”

Knowing this, Scarcelli and his team developed a microscopy technique that can measure the local refractive index using Brillouin spectroscopy—a light-scattering technology that was previously used to sense the mechanical properties of tissue and cells without disrupting or destroying either.

“We experimentally demonstrated that, by using a dual Brillouin scattering technology, we could determine the refractive index directly, while achieving three-dimensional spatial resolution,” Scarcelli said. “This means that we could measure the refractive index of cells and tissue at locations in the body—such as the eyes—that can only be accessed from one side.”

In addition to measuring corneal or lens refraction, the group is working on improving its resolution to analyze mass density behavior in cell biology or even cancer pathogenesis, Scarcelli said.

Along with Scarcelli, BIOE Ph.D. student Antonio Fiore (first author) and Carlo Bevilacqua, a visiting student from the University of Bari Aldo Moro in Bari, Italy, contributed to the paper.