University of Maryland students took top spots for both the graduate and undergraduate categories in this year’s the Vertical Flight Society’s (VFS) Student Design Competition.

The 2020-2021 competition—“2025 Unmanned Vertical Lift for Medical Equipment Distribution”—required students to develop an unmanned vertical lift concept that could deliver, at high speed, up to 50 kg (110 lb.) payloads to end-user customer sites up to a 50 km (31 mile) radius, and to logistics centers up to 200 km (124 miles) away.

According to the VFS press release, “autonomous aerial delivery of supplies and commodities has been of high interest in recent years, and the COVID-19 pandemic amplified the need for fast autonomous delivery to precise locations. Vertical lift technology can aid the worldwide community through safe distribution of medical supplies and other commodities through runway-independent “contactless” delivery,” and include other applications in disaster relief and commercial spaces.

Named after the unicorn’s horn and its legendary powers of healing, team Alicorn’s tandem rotor autonomous unmanned air vehicle utilized a tandem configuration for a number of factors including its compact design, low risk loading and high payload capacity. In addition to building for speed and safety, the team also designed the craft to have a low acoustic signature, a feature that may become increasingly critical in the future when more vehicles may be in the skies. Beyond emergency deliveries, their vehicle has potential applications in areas like agriculture, surveying and inspection, communications and more.

“At times, we had to remind ourselves that we weren't actually building this thing; that it was only a paper design. We really took the details and operational concerns seriously. This influenced everything from the high-level performance evaluations to the detailed design of the payload delivery mechanisms,” explained Jayasundara, Alicorn Team Lead. “"We're rather proud of our design and think it represents a very practical solution to the mission. It will be interesting to see if either of the UMD designs gather any interest in the autonomous aerial package delivery scene.”

Leading the team to win the competition was an experience of a lifetime! The design course was the perfect capstone to end my experience at the University of Maryland, and it really helped me materialize everything I had learned during the aerospace program.

Garra’s craft, named for the Garra Rufa, or “doctor” fish, an innovative thrust compounded single main rotor (SMR) and a novel open-bottom structural design. According to the team, since the SMR design has been previously approved by the FAA, craft certification would go more smoothly. In addition, their craft features configurations that allows for different payload carrying and loading/unloading options, as well as the ability to deploy payloads either via a hoist while hovering or on ground.

“Leading the team to win the competition was an experience of a lifetime!” said Safiah, Garra’s team leader. “The design course was the perfect capstone to end my experience at the University of Maryland, and it really helped me materialize everything I had learned during the aerospace program.”

This year marks the fourth sweep for UMD teams at this competition and the university's 20th win in the graduate category.

The VFS’ annual design competition challenges students to design a vertical lift aircraft that meets specified requirements, providing a practical exercise for engineering students at colleges and universities around the world and promoting student interest in vertical flight technology.

From Classroom to Competition 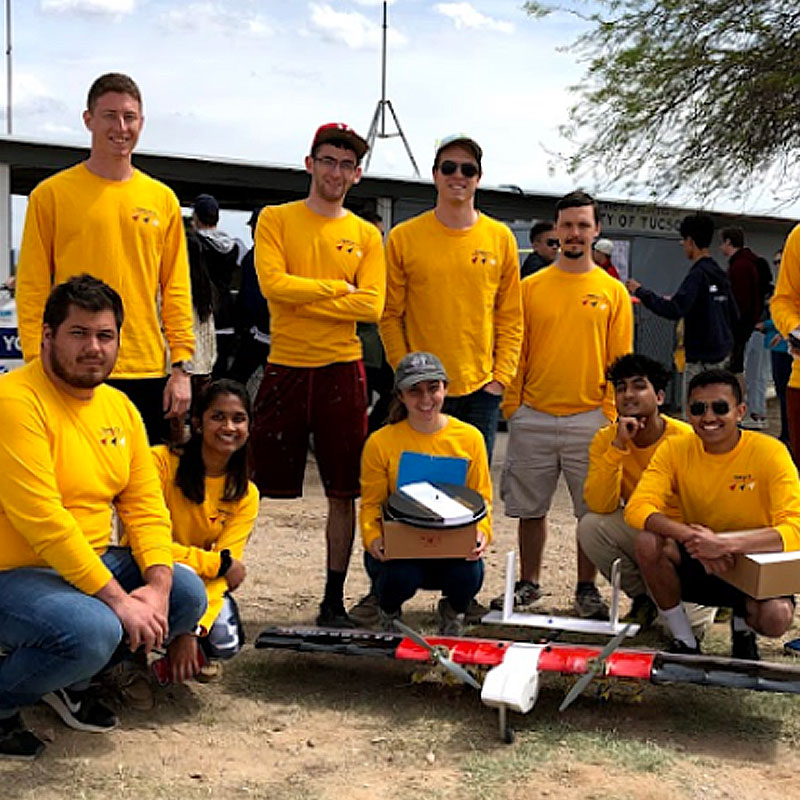