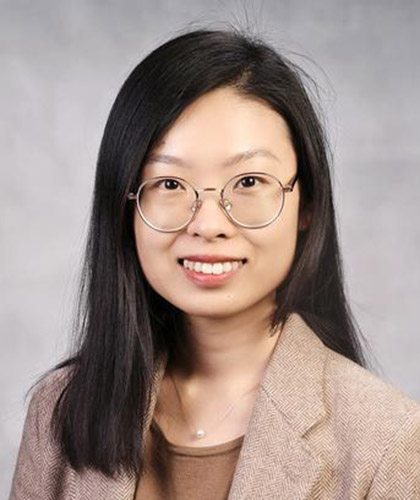 Fu will develop a decision-support tool to help individual patients decide what transplant option is best for them.

The department has named Fischell Fellows annually since 2003.

New institute will significantly add to the vibrant quantum research ecosystem established in the mid-Atlantic region.

Founded by University of Maryland students, the non-profit was recently recommended for donations in the New York Times.

This year, the Clark School honors 70 undergraduates who exemplify the college’s commitment to excellence; five are recognized with Dean’s Awards.

Researchers aim to bridge the gap between microelectronics and biological systems to create next-generation wearables.

From extreme batteries to windows made from wood, Clark School’s trendsetting work ranks it among the country’s Top 10 public engineering schools for the 3rd consecutive year.

Liangbing Hu Elected to the Class of 2021 MRS Fellows

Hu is the first UMD scholar to receive this honor.

Plastic Alternative Made 100% of Wood

Dr. Baheti passed away in March and will be greatly missed by ISR, ECE and the Clark School.

Could Nanocellulose Save Us?

The building blocks of plants may taper our dependency on fossil fuels.

A team of researchers have developed an improved technique for wireless power transfer technology that may promise long-range power transmission without narrowly focused and directed energy beams.

Spanning the Distance to K-12

The Women in Engineering Program shipped nearly 1,500 kits to middle and high school kids, concentrating on communities with traditionally underrepresented populations in STEM.

Half-metallic 2D electron gas can be both created and polarized by the ferroelectrics in multiferroic superlattice, holding promise for high-efficiency spintronics.

The design bolsters both battery safety and performance.

UMD engineers have reinvented a 26,000-year-old manufacturing process into an innovative approach to fabricating ceramic materials.

Angela Jones, Ph.D. created a series of innovative experiments that her students can perform at home.

AMBIC Industry Board members and other researchers convened to discuss new and ongoing projects.

The ISR Ph.D. students won in the bioengineering and neuroscience and cognitive science categories.

'Super Electrolyte' Capable of Operating in Extreme Temperatures, From the Arctic Tundra to the African Savannah

The new research center will catalyze the development of high-impact quantum technologies.

UMD researchers developed a technique to drive teams of bacteria to work together autonomously.

A World Bank delegation visited campus to learn more about transportation initiatives being developed at UMD.

UMD researchers developed a technique to drive teams of bacteria to work together autonomously.

Building on a Childhood Dream

FPE Alumni Jack Medovich discusses how his education compelled him to start a non-profit geared towards empowering child burn victims.

UMD Engineer Selected for Next Phase of Small Spacecraft Mission

Christine Hartzell is the mission scientist on one of three finalist missions selected by NASA for future small satellites.

Awards honor inventions with potential for transformative impact on science, society, and the free market.

The project is funded under the Office of Naval Research Atmospheric Propagation Studies for High Energy Lasers program.

MTI and Battelle to Build Database for Public-Private Partnerships

The database will help state and local governments know when and how to best engage in P3s.

Erich Meissner and his teammates win UMD's Pitch Dingman Competition and Do Good Challenge for their start-up, Symbiont Health.

Study will be in Collaboration with Baltimore-Based Pixelligent Technologies.

reACT will make its competition debut in October.

Hu, Das flow water through wood in new use of natural materials

ChBE Ph.D. Student, Chen Gong, is one of three students to receive the 2017 Harry K. Wells Graduate Fellowships from the Clark School of Engineering.

Technica diverges from the typical hackathon as it encourages gender diversification

UMD's Technica Expected to Be Largest All-Women Hackathon in U.S.

This weekend, the University of Maryland will host an anticipated 800 women for Technica.

Scientists at the University of Maryland (UMD) have developed a novel method for altering the light reflected or absorbed by a material by match-making combinations of gold, silver, and copper into various mixtures of metals, or alloys.

Jie Chen recognized for outstanding scholarship and substantial contributions to the scientific community.

A Billion Holes Can Make a Battery

Battery inside a nanopore has commercial potential

Challenge to address hunger, education, and sustainability co-sponsored by UMD

Foraging Bats Warn Others Away From Their Dinners

Pixelligent has raised more than $17 million over the past four and a half years.

Annual event invites everyone to learn more about biomedical engineering.

The seed round is the largest of any student company while in the program.

A Battery Made of Wood?

Professor Howard Milchberg was selected because of his efforts to advance the field of optics.

From Here to Infinity examines art inspired and created by science and technology.

Research a part of MPowering the State collaboration between UMD, UMB.

Research in plasma physics recognized; third such award for students of Howard Milchberg.

The Weird World of "Remote Heating"

Device developed at the Clark School could help prevent hemorrhages, stroke and death during brain surgery.

Clark School research could improve the performance and cost of low-temperature fuel cells for transportation, electronics.

Sharma Is New University of Houston ME Chair

Lab-on-a-chip produces, assembles microparticles in customized order; could be used for drug discovery.

Praise for team entered into the Congressional Record.

Finding by Clark School researchers could lead to new air speed and stall detectors for aircraft.

Team will compete against seven other finalists at national competition in San Antonio in April.

Clark School's nanofactories could be next big step in antimicrobial treatment.

Campus memorial service to be held Wednesday, March 25 at 3:00 pm in the University Chapel.

von Eschenbach cites the importance of the FDA's link with the University.

Balaji Sampath was recognized for his philanthropic work in India.

The project this year was named UM911-Aeneas, a multi-role disaster rescue vehicle.