The vision, design, and development of Clark Hall could not be executed without the generosity of two benefactors committed to improving human health for millions through engineering innovations. 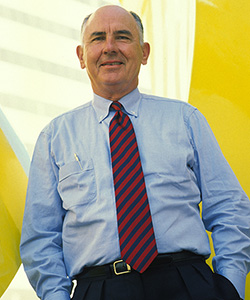 When it comes to major building projects, Clark Construction is a household name. From sports venues to hospitals to museums, the company’s iconic blue logo is a familiar sight across the country.

As one of the largest privately held companies in the nation, it is hard to imagine its founder’s humble beginnings at the University of Maryland.

As a young man of modest means, A. James Clark hitchhiked his way from his home in Bethesda, Md., to College Park each day to pursue a degree in engineering. His education was made possible by a state scholarship, and his only educational expenses were books.

Shortly after graduation in 1950, he joined the George Hyman Construction Company, a small, local contracting business with a rich history in civil construction. Over the course of several decades, his leadership and vision transformed it into a thriving business with a national footprint. In the late 1960s, he became President and CEO and in 1995, Hyman Construction merged with Omni Construction to become the Clark Construction Group. Today, Clark Construction’s portfolio boasts local and national landmarks including Oriole Park at Camden Yards in Baltimore, Md., the National Museum of the American Indian in Washington, D.C., and Music City Center in Nashville, Tenn.

Clark’s steadfast commitment to undergraduate education moved him to endow a $15 million fund for undergraduate scholarships in 1994, and in 2005, a new $30 million A. James Clark Scholarship Fund to provide financial support to undergraduate engineering students based on merit, need and diversity. His gift strengthened the university’s ability to attract the most talented students nationally and helped address the nation's shortage of highly trained engineers. In recognition of Clark’s philanthropic leadership, the University of Maryland School of Engineering was renamed as the A. James Clark School of Engineering.

Inspired by his strong interest in the promise of biosciences and biotechnology, Clark made a generous gift of $15 million to support the design and construction of the A. James Clark Hall, which will be the 27th structure built by Clark Construction on the University of Maryland campus.

"Mr. Clark's contribution to this new building goes beyond his commitment to his alma mater,” said Darryll Pines, Clark School Dean and Farvardin Professor. “He sees that the future of human health will be impacted by research done in Clark Hall.” 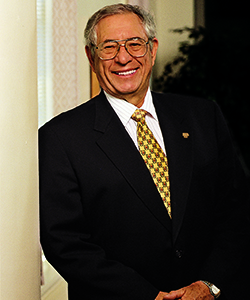 Dr. Robert E. Fischell insists that the life-saving biomedical devices he has developed are not a result of genius, but of simple problem solving.
A native of New York City, Fischell is the inventor behind major medical breakthroughs, including highly flexible, drug-eluting coronary stents, the first implantable insulin pump, and a magnetic pulse device for treating human pain, from migraine headaches to back aches.
After earning a degree in mechanical engineering at Duke University, Fischell relocated to Maryland to work at the U.S. Naval Ordnance Lab at White Oak and later at the Johns Hopkins Applied Physics Laboratory. In 1953, he earned a master’s degree in physics at the University of Maryland, and in 1996, the university awarded him an honorary doctorate.
Fischell’s interest in medical device innovation grew from his research in designing long-lasting batteries for spacecraft, which he translated to the first rechargeable pacemaker for cardiac patients. His latest inventions include an implantable device that warns a patient and medical personnel of a heart attack at the very first sign of its start, and a neurostimulator implanted in the skull that can detect abnormal electrical activity in the brain and correct it before a seizure occurs.
In 2005, Fischell and his family donated $31 million to establish the Fischell Department of Bioengineering and the Robert E. Fischell Institute for Biomedical Devices at the University of Maryland.
Most recently, Fischell committed $6 million toward A. James Clark Hall, where the Fischell Department of Bioengineering and the Robert E. Fischell Institute for Biomedical Devices will be headquartered.
More than 200 patents and a dozen companies later, Fischell is a familiar face to the Clark School’s students, faculty, and staff.
“One of the best things about Bob Fischell is that he gives us his time,” said William Bentley, the Robert E. Fischell Distinguished Professor of Engineering and Chair of the Fischell Department of Bioengineering. “He spends time with our students and faculty to help us understand how to solve health problems through innovation and methods to commercialize inventions to address clinical problems.”
Fischell is a member of the National Academy of Engineering, and is the recipient of many major honors, including the Inventor of the Year for the United States in 1983, induction into the Space Technology Hall of Fame and the Clark School’s Innovation Hall of Fame and an honorary Doctorate for Humane letters from the Johns Hopkins University in 2008. He serves on the Board of Visitors for both the Clark School and the University of Maryland School of Medicine and the University of Maryland Foundation Board of Trustees.